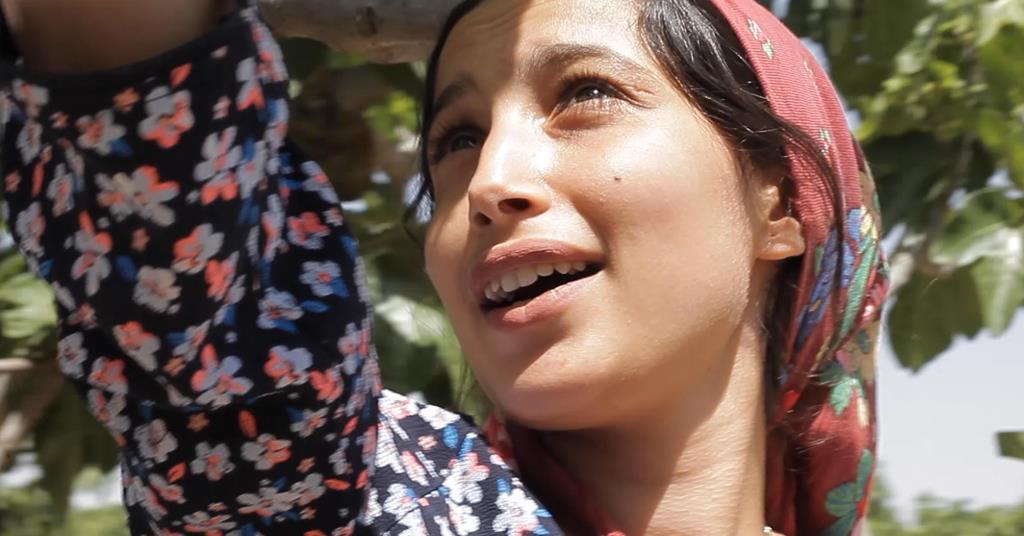 Will this trend continue into 2022? Screen rounds up key titles from the Middle East and North Africa that are likely to excite festival programmers this year.

Dir. Nada Mezni Hafaiedh
Tunisian filmmaker Hafaiedh pushed boundaries at home in 2017 with the feature documentary Upon The Shadow exploring LGBTQ+ rights in the country through a portrait of the outspoken feminist and activist Amina Sboui. For her fiction feature debut, the filmmaker explores what it means to be born an intersex person in Tunisia. Rising Tunisian star Amina Ben Smaïl plays a 23-year-old who is ostracised from society after being born with both genitalia. It is lead produced by Mohamed Slim Hafaiedh at Tunis-based Leyth Production.
Contact: Leyth Production

Dir. Maryam Touzani
Moroccan filmmaker and screenwriter Touzani has collaborated for many years on partner Nabil Ayouch’s films. She made waves internationally in her own right in 2019 with debut feature Adam which world premiered in Cannes Un Certain Regard. For her second film, Saleh Bakri and Lubna Azabal star as a couple who run a caftan store in one of Morocco’s oldest medinas in the town of Salé. The wife turns a blind eye to her husband’s homosexuality until a young apprentice upsets the status quo. It is produced by Ali n’Productions, Touzani’s company with husband Nabil Ayouch, and Velvet Films, Les Films Du Nouveau Monde and Snowglobe.
Contact: Ali n’Productions, Houda Lakhdar

Dir. Lotfy Nathan
Egyptian-UK filmmaker Nathan broke out internationally with the 2013 short documentary 12 O’Clock Boys, about a teenage dirt bike gang in Baltimore. His debut feature takes him to Tunisia. It follows the political awakening of an ordinary young man in the wake of his father’s sudden death which leaves him responsible for his young sisters and exacerbates his already precarious situation. It is lead produced by Julie Viez at Paris-based Cinenovo with Cinetelefilms (Tunisia), Wrong Men (Belgium), Detail Films (Germany) and Tarantula (Luxembourg).
Contact: Films Constellation

Dir. Wissam Charaf
Lebanese-French director Charaf has promised “an intimate vision” of contemporary Lebanese society through this impossible Beirut-set love story between a Syrian refugee and an exploited Ethiopian domestic worker. It is Charaf’s second feature after Heaven Sent which played in Cannes parallel section Acid in 2016. The production is lead produced by Charlotte Vincent at Paris-based Aurora Films, whose credits include Davy Chou’s Diamond Island, Patric Chiha’s If It Were Love and Axelle Ropert’s Little Solange. Né à Beyrouth and Intramovies are on board as co-producers.
Contact: Aurora Films

Dir. Firas Khoury
Galilee-born Palestinian director Khoury’s first feature explores the complex reality of the Palestinian population living within Israeli borders. The coming-of-age tale revolves around a Palestinian teenager growing up in a Galilee village. Eager to impress a beautiful classmate, he joins a mission to replace the Israeli flag flying from their school with a Palestinian one on the eve of Israeli celebrations to mark its independence in 1948, which is a day of mourning for Palestinians. It is lead produced by Marie Pierre Macia and Claire Gadéa at Paris-based MPM Film, whose recent co-production credits include Wanuri Kahiu’s Rafiki and Azra Deniz Okyay’s Ghosts.
Contact: MPM Film

Dir. Ahmed Yassin Al Daradji
London Film School alumnus Al Daradji was in his late teens when the US invaded Iraq in 2003. The impact of the ensuing chaos on the country’s children has influenced all his award-winning shorts to date. His debut feature revolves around a young rubbish picker who rescues a sex doll from a Bagdad dump. There is growing buzz around the production following its prize-winning streak at project markets over the second half of 2021, including best film in post-production in Venice Film Festival’s Final Cut last September. It is produced by Huda Al Kadhimi at Ishtar Iraq Film Production, Margaret Glover and May Odeh, whose credits include 200 Meters and The Crossing.
Contact: Odeh Films

Dir. Hicham Lasri
Casablanca-based director, artist and writer Lasri is known on the festival circuit for his avant-garde and experimental works including Starve Your Dog and Headbang Lullaby, which both played in the Berlinale’s Panorama section in 2016 and 2017 respectively. This self-produced new feature revolves around a woman known for uncontrollable bursts of anger as she struggles to survive a post-apocalyptic environment in her hometown of Casablanca on the eve of her 30th birthday.
Contact: Hicham Lasri

Dir. Mounia Meddour
Algerian-French director Meddour made waves internationally with her debut feature Papicha about a young female student determined to put on a fashion show at a time of rising conservatism in Algeria amid the civil conflict of the 1990s. It world premiered in Cannes Un Certain Regard in 2019 and was Algeria’s submission to the 2020 Oscars. Meddour reunites with the film’s star Lyna Khoudri for her second Algeria-set, Morocco-shot feature about a young woman whose ballet career is thrown into question after she is brutally attacked by a man. Xavier Gens and Gregoire Gensollen at Paris-based The Ink Connection lead produce.
Contact: The Ink Connection

Dir. Soudade Kaadan
Inspired by her own experiences in the early days of the Syrian civil war in Damascus, Syrian filmmaker Kaadan follows a teenage girl and her mother who are suddenly forced to make their own decisions after a lifetime of deferring to a male figure of authority as the conflict closes in on their home. Kaadan’s first feature The Day I Lost My Shadow won the Venice Film Festival’s Luigi De Laurentiis Award for best first film in 2018. It is lead produced by Soudade and her sister Amira Soudade under the banner of their company Kaf Productions.
Contact: Kaf Production

Dir. Kaouther Ben Hania
Tunisian filmmaker Ben Hania clinched her country’s first-ever Oscar nomination in 2021 with drama The Man Who Sold His Skin, which world premiered in Horizon’s section, winning its Syrian lead Yahya Mahayni best actor. Going back to her documentary roots, her new feature is a hybrid work about a mother and her four daughters, two of whom followed their ISIS militant boyfriends to Libya and are now trapped there in a prison camp. Ben Hania has been developing and shooting the film for more than five years but long-time producer Habib Attia of Tunis-based Cinétéléfilms says it could be ready in time for a festival outing later this year. Nadim Cheikhrouha at Paris-based Tanit Films is also on board as a producer.
Contact:Cinétéléfilms

Dir. Sofia Alaoui
Moroccan-French director Alaoui won the Sundance grand jury short prize for So What If The Goats Die in 2020. Shot in the Atlas Mountains, it followed a young shepherd who returns to his village to find it mysteriously empty. Alaoui’s debut feature also contains an element of mystery, revolving around a recently married young pregnant woman living with her stifling in-laws whose life is changed forever by a supernatural event. The feature is lead produced by Margaux Lorier at Paris-based company Wrong Films in co-production with Alaoui’s Jiango Films and Srab Films.
Contact: Wrong Films

Dir. Yasmine Benkiran
This Thelma & Louise-style Atlas region-set road movie is the debut feature of Moroccan filmmaker Benkiran, who cut her teeth in production in Paris before moving over to screenwriting and directing. A repeat offender breaks out of prison to reunite with her young daughter and takes a female truck driver hostage. The trio embarks on a trip across the valleys of the Atlas Mountains to the Atlantic. Nisrin Erradi, best known internationally for her role in Maryam Touzani’s drama Adam, co-stars with Nisrine Benchara and Rayhan Guaran. It is produced by Jean des Forêts and Amélie Jacquis at Paris-based Petit Films.
Contact: Petit Film, Amélie Jacquis

Dir. Taghrid Abouelhassan
Egyptian filmmaker Abouelhassan took co-directorial credits on the 2020 portmanteau film Chronicles Of Her, which travelled the festival circuit last year. Her first feature revolves around a little person who goes online to find a partner but hides her dwarfism from her virtual suitors. She then finds herself caught between a tall man and another little person who is devoted to her but embodies everything she hates about herself. It is lead produced by Egyptian-US producer Miral El Fakharany under the banner of her company Plotheads and Cannes and Venice habitué regular Mohamed Hefzy of Cairo-based Film Clinic banner, with Daniel Ziskind taking an associate producer credit.
Contact: Plotheads

Under The Fig Trees (Tun-Fr-Switz)

Dir. Erige Sehiri
Sehiri’s first fiction feature promises a rare snapshot of life in rural Tunisia and its youth through this portrait of teenagers employed as fig pickers over the summer. Working with an amateur cast, Sehiri shot the film guerrilla-style against the backdrop of her father’s picturesque Berber village of Kesra in northwestern Tunisia. A key member of Sehiri’s stripped-down crew was Tunisian cinematographer and lighting specialist Frida Marzouk, who worked on a number of Abdellatif Kechiche’s films. Sehiri’s previous credits include the award-winning documentary Railway Men. She produces her new film under the banner of Tunis-based Henia Production with Palmyre Badinier at Switzerland-based Akka Films and Didar Domehri at Paris-based Maneki Films.
Contact: Luxbox