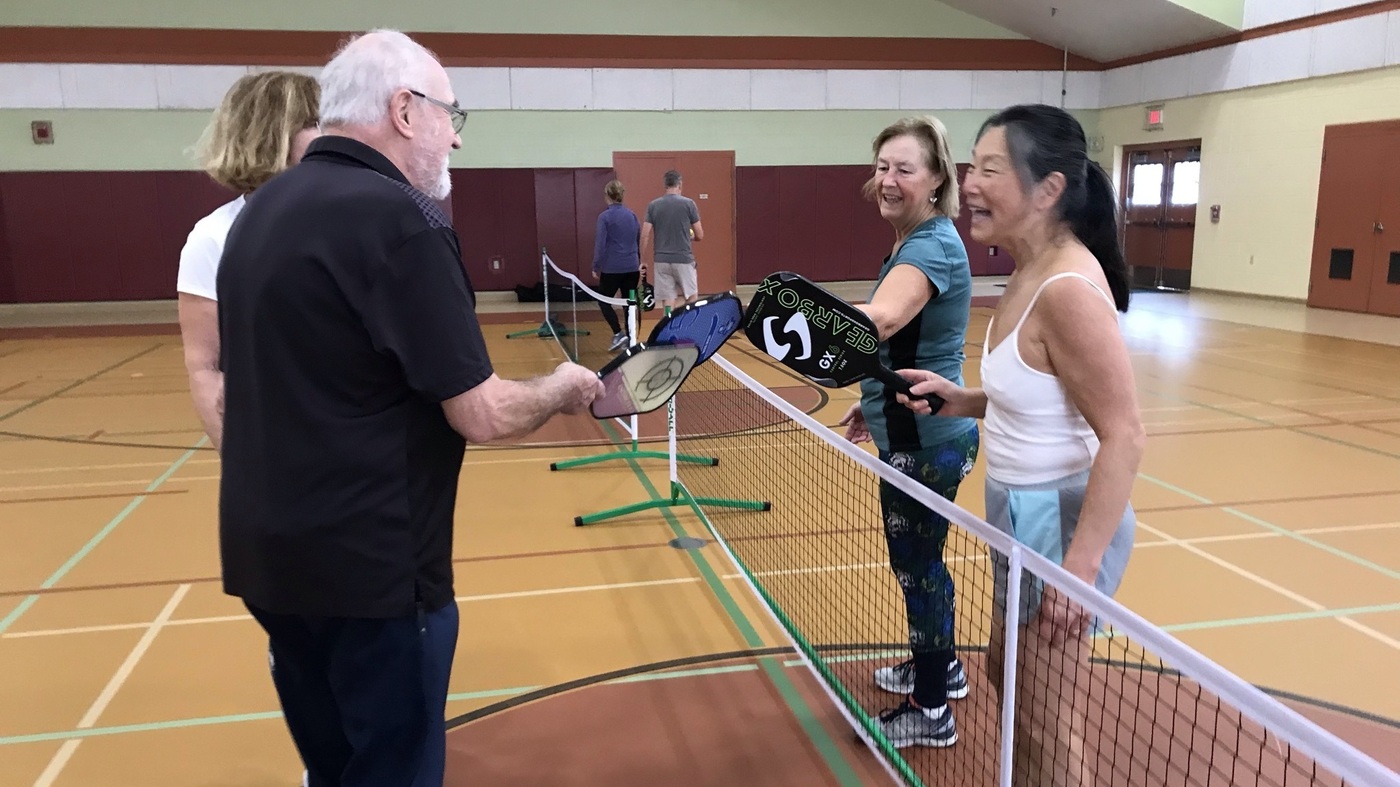 Freida Yueh taps paddles at the end of a match with fellow pickleball players at the Meredith, Parks & Rec facility in Meredith, NH.

Freida Yueh taps paddles at the end of a match with fellow pickleball players at the Meredith, Parks & Rec facility in Meredith, NH.

For the rapidly decreasing number of Americans who’ve never heard of pickleball, the obscure paddleball game is America’s fastest growing sport for the second year in a row.

Invented in 1965 by three middle-aged fathers in Washington state, pickleball is a quirky cross between tennis, ping pong and badminton, played with a paddle and a perforated plastic ball. The founders are said to have named the game after a family dog called Pickles.

With 4.8 million people now playing—almost double the number from just five years ago, according to the Sports and Fitness Industry Association — some of the sport’s devotees are capitalizing on pickleball’s spike in popularity.

The game now has two national professional tournaments, both formed in the last four years, and pickleball organizers are courting corporate sponsors to help grow the sport in the U.S. and abroad as part of a bid for Olympic inclusion.

“We’re still small and scrappy but we’re not so innocent anymore,” said Stu Upson, who was hired in late 2020 as the first-ever CEO of USA Pickleball, the sport’s official governing body. The organization was formed in 2005 to set rules and promote the sport.

Upson believes pickleball can keep growing without losing the accessibility that’s fueled its rise over the last decade. “People are looking for avenues to have some fun, get some exercise, but do it in an environment that’s not divisive,” he said. “That’s a pretty important thing in our society today I believe.”

Freida Yueh on the pickleball court at the Parks & Rec facility in Meredith, NH.

Freida Yueh on the pickleball court at the Parks & Rec facility in Meredith, NH.

Most of pickleball’s core players—those who play more than eight times per year—are over age 65, but the game is getting younger, with the strongest growth among players under 55, according to USA Pickleball.

But with so many new players, the US is struggling to keep up with demand for courts.

The country has only about ten thousand places to play, by USA Pickleball’s count, but that continues to grow by several dozen every month. Sports clubs and hotel groups, including Marriott and Omni Resorts, are converting tennis courts or purpose-building new courts for pickleball, while a restaurant chain called Chicken N’ Pickle that has locations in four states has said it will double its footprint within the next year.

Municipalities nationwide are also trying to meet the demand for pickleball venues—so many that USA Pickleball is putting together a “toolkit” for community planners with guidelines and cost estimates for building new courts, which can range from $300 for a temporary net, equipment and tape to mark lines, to $30,000 for a permanent court.

In Meredith, New Hampshire, the town’s Parks and Rec Department offers indoor pickleball in a multipurpose gym that’s also used for basketball, tennis and other sports.

The program is capped at around fifty people with dozens on the waiting list, and some pickleball players got so serious that their sessions are now supervised and players are separated by skill level.

“It’s addictive so we just started playing and now with our other friends and relatives—actually everybody we know now plays pickleball,” said Freida Yueh, who joined the Meredith program with her husband two years ago after they retired in the area.

This spring the couple is traveling with two others to a pickleball training camp in North Carolina.

“It’s going to be six days of intense video instruction and games,” Yueh added. “I’m hoping that I learn just one skill that improves my game.”

Pickleball is going from amateur to pro

Pickleball is proving attractive to a wide range of corporate sponsors as the sport seeks new sources of revenue. USA Pickleball has two-dozen brand partners, ranging from gear makers to an online healthcare market and a CBD company.

“We have people who understand the sports business, not just the pickleball business,” said Upson. “Is the revenue that’s coming in important? It’s critical for us to reinvest in the sport and grow, but it’s not going to drive us.”

Pickleball is also fast becoming a spectator sport. Its first professional tournament, the Professional Pickleball Association (PPA) Tour, formed in 2018 and was recently acquired by the owner of the Carolina Hurricanes National Hockey League team. USA Pickleball sanctioned a second pro tour that started a year later, launched by the Association of Pickleball Professionals (APP).

Both events boast hundreds of thousands of dollars in prize payouts that are minting the first generation of pickleball players who can make a living in the game.

“Professional players are being able to really become celebrities and spotlights, people that are recognizable in the world,” said Connor Pardoe, Commissioner of the PPA Tour, whose players sign three year exclusive contracts. “The reason we do that, one, is to make sure the best people are at our events and, two, to really protect our investment.”

Traditional broadcasters’ interest in the sport is growing. So far pickleball fans can watch amateur and professional matches mostly online on sports or social channels.

“The ability for a sport to find an audience quickly via social media is unprecedented,” said Ben Shields, who lectures at MIT’s Sloane School of Management and studies the sports industry.

“Think about all of the new digital experiences that are available to sports leagues to connect with fans—streaming games in an interactive way, fantasy pickleball, which brings fans in on a different level, all the social media conversations and experiences you can create around the sport.”

“I think if pickleball, in its own humble way, can continue to grow its participation and find ways to make the sport a compelling fan product, who knows, ten, twenty years, it could be a very viable competitor in the global sports industry.”

A successful Olympic bid might accelerate that timeframe. To mount one, pickleball needs competitive players in at least 75 countries. So far, the International Pickleball Federation has seventy member nations and most of them joined in the last three years.

Organizers are aiming for inclusion in the 2028 Olympics as a demonstration sport. For now, pickleball’s fans are just happy that more players are finding their way to a sport that brings people together.

“A lot of people are getting in because they love the game,” said Upson of USA Pickleball. “It’s all over the place in a good way.”