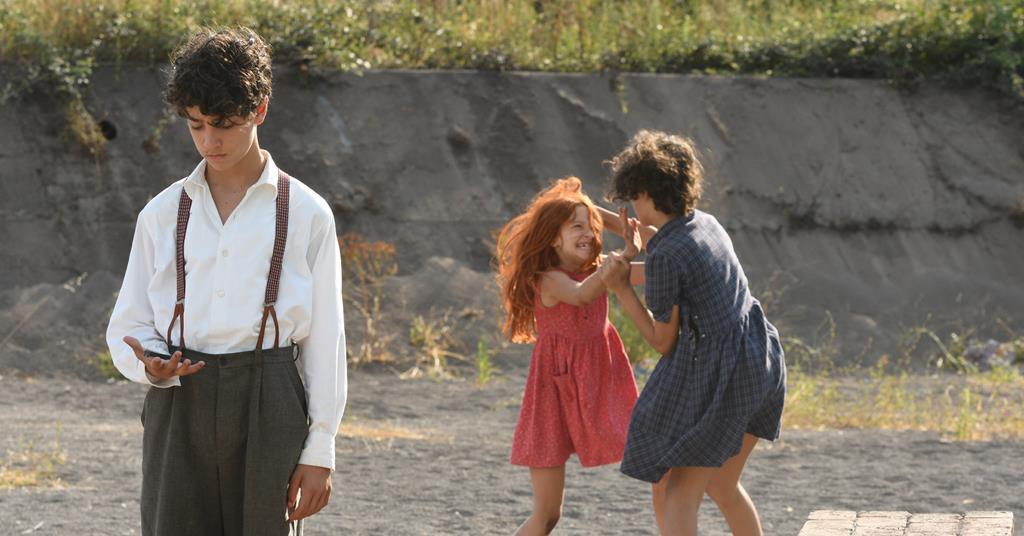 Dir Nicolette Krebitz
Krebitz’s fourth outing as director centres on “just another imposs­ible love story” between an actress (Sophie Rois) and a thief (Milan Herms). Krebitz’s drama The Heart Is A Dark Forest was selected for the EFM’s German Cinema showcase in 2008, and she contributed to the omnibus film Germany 09: 13 Short Films About The State Of The Nation which played at the 2009 Berlinale. Her previous film Wild premiered at Sundance in 2016, and won several prizes at the German Film Awards the following year. A E I O U will be released in Germany on May 5 through Port au Prince Pictures.
Contact The Match Factory

Dir Carla Simon
Catalan director Simon returns to the Berlinale five years after her triumphant debut (and Spain’s 2018 Oscar entry) Summer 1993, which played in the Generation Kplus sidebar and went on to win the festival’s best first feature prize. This follow-up is about generational tensions in a family of Catalonian peach farmers. Delayed by the pandemic and the need to shoot in the short peach season, it unites Madrid (Avalon), Barcelona (Vilaut) and Rome (Kino Produzioni) in a production sold by France’s mk2 Films.
Contact: mk2 Films

Dir Kamila Andini
Following Yuni’s appearance in Toronto’s Platform section in 2021, Kamila has readied her fourth feature, set during Indonesia’s turbulent post-independence years in the 1960s, as her Berlinale Competition debut. Before, Now & Then is an intimate film about the domestic life of a young widow who has remarried a wealthy man — her past continues to haunt her until she finds friendship with a mistress of her new husband. Kamila, daughter of renowned Indonesian filmmaker Garin Nugroho, has received numerous awards for her films. Her debut feature The Mirror Never Lies (Generation, 2012) and The Seen And Unseen (Generation Kplus, 2018) premiered in Berlin, with the latter winning the section’s grand prize.
Contact: Flavien Eripret, Wild Bunch International

Both Sides Of The Blade (Fr)

Dir Claire Denis
Denis brings Juliette Binoche and Vincent Lindon together on the big screen for the first time in this love triangle drama — also known as Fire — which co-stars Grégoire Colin. The filmmaker completed the screenplay with Christine Angot after the shoot of her 1980s Nicaragua-set romantic drama The Stars At Noon was put on hold due to the pandemic. (That has since shot and could also hit the festival circuit this year.) Both Sides Of The Blade is Denis’ first time in Berlinale Competition, although previous works including Beau Travail, Towards Mathilde and 35 Shots Of Rum have also played in other sections of the festival.
Contact: Flavien Eripret, Wild Bunch International

Dir Phyllis Nagy
After being Oscar-nominated in 2016 for her screenplay for Todd Haynes’ Carol (which premiered in Cannes’ Competition and won the festival’s Queer Palm), Nagy makes her feature-directing debut with this timely 1960s drama set in Chicago, about a married woman with an unwanted pregnancy who is forced into the world of underground abortions. Elizabeth Banks and Sigourney Weaver topline the cast of Call Jane, which is making its inter­national premiere at Berlin after bowing first at Sundance.
Contact: Protagonist Pictures

Everything Will Be OK (Fr-Camb)

Dir Rithy Panh
Cambodian filmmaker Panh won Berlin’s documentary award in 2020 for his last feature-length work Irradiated. He returns with this docu-­fiction exploring totalitarianism and democracy through the imaginary prism of what might happen if animals took power. Everything Will Be OK takes its name from a slogan on the T-shirt of a young Myanmar woman who became a symbol of the pro-democracy movement when she was shot dead during protests in 2021. Like Panh’s Oscar-nominated, Cannes 2013 Un Certain Regard winner The Missing Picture, the film is produced by regular collaborator Catherine Dussart and employs figurines in its storytelling.
Contact: Playtime

Dir Paolo Taviani
Taviani returns to Berlin after winning the 2012 Golden Bear with his brother and directing partner Vittorio (who died in 2018) for Caesar Must Die. Leonora Addio shares its name with a short story by Luigi Pirandello, but Taviani’s feature is more about the Sicilian writer himself, interlacing the tragi­comic story of what happened to his ashes with a news item about a crime committed by an Italian immigrant boy in 1930s Brooklyn. The film opens in Italy on February 17 via 01 Distribution, and is produced by Donatella Palermo’s Stemal Entertainment with Rai Cinema.
Contact: Fandango Sales

Dir Ursula Meier
It has been 10 years since Meier’s last dramatic feature Sister picked up the best director Silver Bear. Since then, she has made an episode of TV drama Shock Waves and short documentaries, and had been prepping her English-language feature debut before setting that aside to focus on this drama. The Line centres on a woman — played by the film’s co-writer Stéphanie Blanchoud — who is forbidden from coming within 200 metres of her family home after hitting her mother (Valeria Bruni Tedeschi). 120 BPM (Beats Per Minute) director Robin Campillo has a contributing screenplay credit, and the Dardenne brothers are on board as co-producers via Les Films du Fleuve.
Contact: Memento International

Dir Hong Sangsoo
Longtime festival favourite Hong Sangsoo’s Introduction picked up a Silver Bear for best screenplay at the Berlinale last year, following one for best director the year before with Woman Who Ran. The Novelist’s Film follows a female author who takes a long trip to visit a bookstore run by a younger colleague. Lee Hyeyoung (In Front Of Your Face), Kim Minhee (Introduction) and Seo Younghwa (The Woman Who Ran) star, and the film is produced by Jeonwonsa Film Co.
Contact: Finecut

One Year, One Night (Sp-Fr)

Dir Isaki Lacuesta
Catalan director Lacuesta has twice won the Golden Shell at San Sebastian, with The Double Steps (2011) and Between Two Waters (2018). His latest drama should boost his profile considerably, addressing the Paris Bataclan attack of 2015 and featuring several high-profile names. 120 BPM (Beats Per Minute)’s Nahuel Perez Biscayart stars alongside Noémie Merlant from Paris, 13th District and Portrait Of A Lady On Fire. Producers are Ramon Campos for Mr Fields and Friends and Jérome Vidal for Noodles Production, alongside Lacuesta’s own La Termita Films.
Contact: Chloé Marquet, Studiocanal

The Passengers Of The Night (Fr)

Dir Mikhaël Hers
Set in the early 1980s, Hers’ film stars Charlotte Gainsbourg as a woman left to raise two teenage children on her own after her husband walks out, just as socialist president Francois Mitterrand takes the reins of power, bringing in a new era of optimism for many. Unexpected personal salvation arrives in the form of a troubled homeless teenager she invites into the family home. Hers’ previous film Amanda debuted in Venice’s Horizons section in 2018, before winning best film at Tokyo and receiving two César and two Lumiere nominations.
Contact: mk2 Films

Dir Francois Ozon
Following last year’s Cannes Competition title Everything Went Fine, prolific French director Ozon indulges his love of German culture and Rainer Werner Fassbinder with this loose adaptation of the filmmaker’s 1972 film The Bitter Tears Of Petra Von Kant. (Ozon previously adapted Fassbinder’s work for his 2000 Berlin Competition title Water Drops On Burning Rocks.) Here, Denis Ménochet plays the titular Peter von Kant, a famous director who mistreats his live-in assistant; the tables are turned when he helps out a young man, who taps his connections and then moves on as soon as he acquires fame. Ozon’s paedophile priest drama By The Grace Of God won the grand jury prize at Berlin in 2018.
Contact: Playtime

A Piece Of Sky (Switz-Ger)

Dir Michael Koch
Set in a remote Swiss Alpine village in the Uri canton and based on a radio news story that caught Koch’s attention, his second feature centres on a recently ­married rural wife’s attempts to deal with her husband’s increasingly erratic behaviour after he is diagnosed with a brain tumour. The former actor’s feature directing debut, immigration drama Marija, premiered at Locarno in 2016. Featuring a cast of non-­professionals, A Piece Of Sky’s Covid-affected location shoot was shut down after 10 days in March 2020, before resuming from July to December.
Contact: Jan Naszewski, New Europe Film Sales

Dir Andreas Dresen
Based on the true story of a Turkish mother who mounted a campaign to secure her son’s release from the Guantanamo Bay detention camp, Dresen’s latest film is his fourth to premiere in the Berlinale’s Comp­etition section following Night Shapes (1999), Grill Point (2002) and As We Were Dreaming (2015). It reunites the director with Alexander Scheer — the star of his 2018 biopic Gundermann, which was also produced by Cologne-based Pandora Film Produktion — teaming here with Dresen’s own Iskremas Filmproduktion and France’s Cinéma Defacto.
Contact: The Match Factory

Dir Li Ruijun
Li’s Competition debut follows two outcasts (Wu Renlin and Hai Qing)who are forced into an arranged marriage and form an unexpected bond. Li is also writer, editor and art director of the film, which is set in his hometown of Gaotai in northwest China’s Gansu province. Li was last in Berlin’s Generation section with River Road (2015), while his most recent film Walking Past The Future premiered in Cannes’ Un Certain Regard in 2017.
Contact: m-appeal

Dir Ulrich Seidl
Austria-born filmmaker Seidl returns to the Berlinale after Paradise: Hope played in Competition in 2013. His latest feature follows a pop star whose fame has fizzled, but who continues to chase his dream in the Italian city of Rimini while his family life implodes. Georg Friedrich, Michael Thomas and Hans-Michael Rehberg star in the film, which is written by Seidl’s frequent collaborator Veronika Franz and produced by Ulrich Seidl Film Produktion, Essential films and Parisienne de Production.
Contact: Coproduction Office

Dir Natalia Lopez Gallardo
Renowned editor Lopez Gallardo — whose credits include Amat Escalante’s Heli, Lisandro Alonso’s Jauja and Carlos Reygadas’ Cannes 2012 Competition title Post Tenebras Lux — makes her feature-directing debut on the story of a woman in the middle of a divorce who takes her children to her family’s abandoned country house. There she is caught up in the search for a missing woman. Carcava and Lobo En Media De Lobos produced, and co-producers are Rei Cine with support from Mexico’s Foprocine fund. Fernanda de la Peza and Joaquin del Paso serve as producers.
Contact: Tarek Shoukri, Visit Films

That Kind Of Summer (Can)

Dir Denis Côté
French-Canadian director Côté won the Berlinale’s Encounters award for best director last year with Social Hygiene, and the 2013 Alfred Bauer award for Vic + Flo Saw A Bear; the latter played in the festival’s Competition, as did Boris Without Beatrice in 2016 and Ghost Town Anthology in 2019. His latest feature in the running for the Golden Bear is the French-language That Kind Of Summer (Un Été Comme Ca), in which three women explore their sexual issues at a rest home. Larissa Corriveau (Ghost Town Anthology), Laure Giappiconi and Aude Mathieu star. Metafilms produced and Shellac Films will distribute in France.
Contact: Shellac