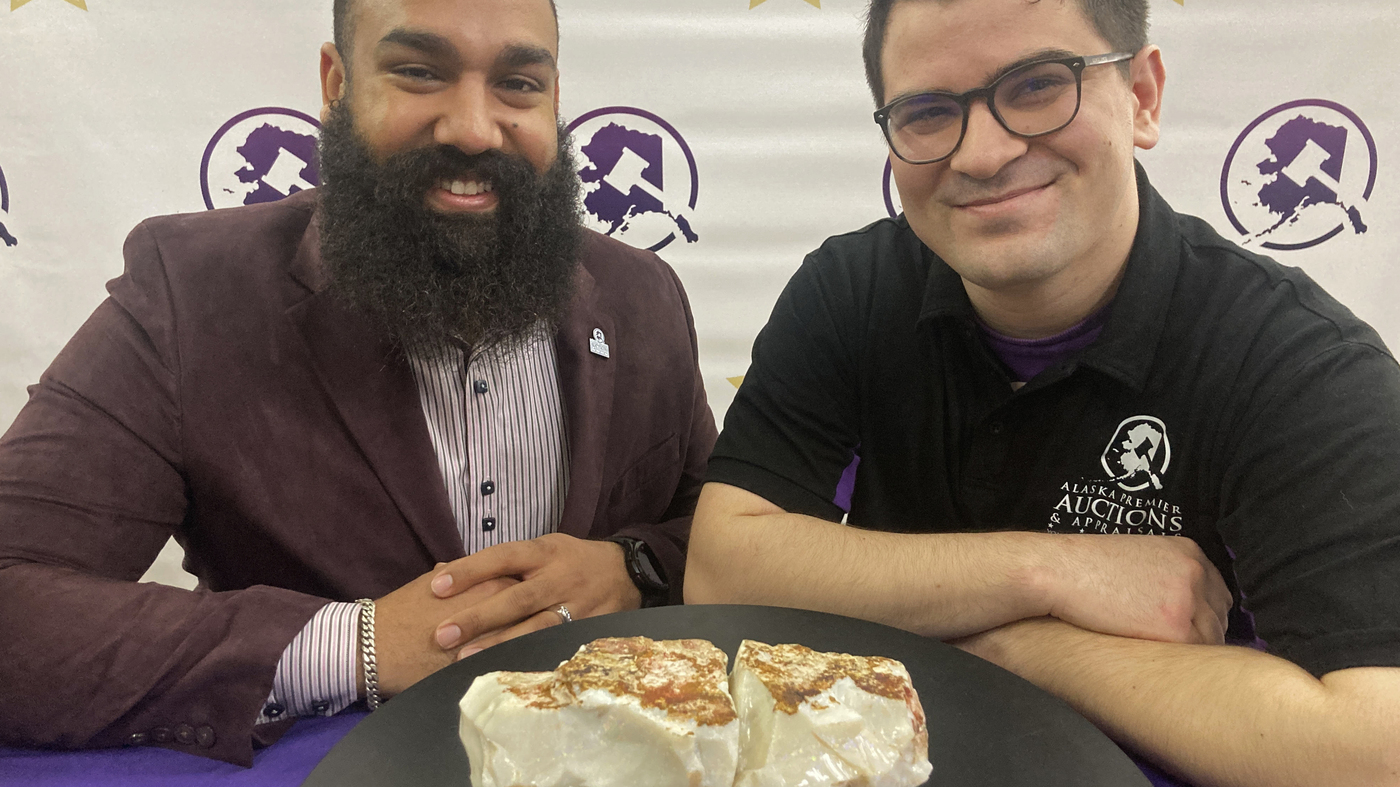 Dan Newman, left, the founder of Alaska Premier Auctions and Appraisals, and Nick Cline, a business partner, pose Friday in Anchorage with the “Americus Australis,” thought to be one the largest gem-quality opals in existence.

Dan Newman, left, the founder of Alaska Premier Auctions and Appraisals, and Nick Cline, a business partner, pose Friday in Anchorage with the “Americus Australis,” thought to be one the largest gem-quality opals in existence.

JUNEAU, Alaska — Nick Cline gets calls about all kinds of items people want to sell through the Anchorage auction house where he works. But he was caught off-guard by a call he got last fall from a man saying he had “one of the largest opals in the world.”

“I was extremely skeptical but extremely excited,” said Cline, a partner and appraisal specialist with Alaska Premier Auctions & Appraisals.

According to the auction house, the opal, dubbed the “Americus Australis,” weighs more than 11,800 carats and is one of the largest gem-quality opals in existence. It also has a long history.

Most recently, it was kept in a linen closet in a home in Big Lake, north of Anchorage, by Fred von Brandt, who mines for gold in Alaska and whose family has deep roots in the gem and rock business.

The opal is larger than a brick and is broken into two pieces, which von Brandt said was a practice used decades ago to prove gem quality.

Von Brandt said the stone has been in his family since the late 1950s, when his grandfather bought it from an Australian opal dealer named John Altmann.

Von Brandt said the opal for decades was in the care of his father, Guy von Brandt, who decided it had been “locked up long enough, that it’s time to put it back out in the world and see what interest it can generate.”

“He entrusted me to figure out which direction we wanted to go to part with the stone,” von Brandt told The Associated Press.

The family, with roots in California, exhibited the stone at gem shows for years, until the early 1980s, he said. His father then branched out into furniture and displayed it at his shop. Guy von Brandt eventually moved to Oregon and kept the stone “kind of tucked away” for many years, von Brandt said.

Von Brandt said he brought it with him to Alaska over a year ago as he weighed the best approach to a possible sale. He said he went with Alaska Premier Auctions & Appraisals because he thought it would get more attention from the newer company than a larger auction house. The sale is set for Sunday.

Cline said the family has documentation surrounding the provenance of the opal. As part of his research, he contacted Fiona Altmann, granddaughter of John Altmann and general manager of Altmann + Cherny in Sydney, Australia.

Altmann said her grandfather, in his business dealings, made regular trips to Europe and the U.S.

Altmann said when Cline emailed her, she was skeptical; the name of the stone, in particular, threw her. But she said she started digging and discovered “something with my grandfather’s handwriting with the picture of the opal with the word ‘Americus Australis.'”

“I with 100% certainty know that their provenance information is 100% accurate” because it lines up with information she has, she said.

The auction house said the stone was discovered in the same field in Australia as the opal known as the “Olympic Australis,” which weighs 17,000 carats and is on permanent display in Altmann’s shop. The Olympic had been among the stones that John Altmann and partner Rudi Cherny acquired in 1956, according to Altmann’s company.

The auction company is seeking minimum bids of $125,000 during Sunday’s auction. Cline said it’s a “calculated risk,” with the company going with what it sees as a conservative approach in hopes of garnering the most attention. It has targeted a sales price of $250,000 to $350,000, Cline said.

The sale includes a smaller piece of the opal that von Brandt said his father cut off to be worn or displayed.

A spokesperson for the Gemological Institute of America said they could not comment on the opal as they had not seen it. The AP reached out to others who did not respond or were unfamiliar with the stone.

Altmann and von Brandt said they would love to see the opal end up in a museum. Von Brandt said he thinks the auction will be “both exciting and difficult, more for my dad than myself.”

His father was a child when the family acquired the stone, and he has a “deeper connection than even I do,” he said.

They both have “nervous excitement,” von Brandt said. “I think it’s going to be good, and we’re optimistic.”