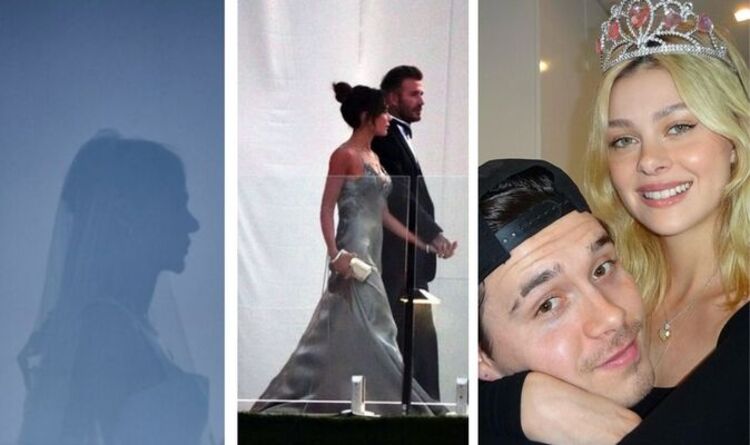 The glitzy wedding, held at a Peltz family mansion in Florida, has set them back £3 million – and no doubt part of that cost involved keeping the wine flowing for the celebrity guests who had invites. The famous revellers included Eva Longoria, Gisele Bundchen, Venus and Serena Williams, Madonna’s son Rocco and Spice Girls Mels B and C.

Gordon Ramsay attended in a suit, amid speculation that the fiery-tempered cook could be a mentor to Brooklyn in the near future, aiding him in his ambition to shine as a chef.

Some unkind Instagrammers have claimed Brooklyn will need all the training he can get, after discovering that a single eight minute episode of his online show was created with 62 staff members and cost a jaw-dropping $100,000 (£74,000) to produce.

The 23-year-old, who failed to personally cook any ingredients himself in his debut videos, has pledged his commitment to shining as a chef in the future, but the cost of his videos are still relatively small in comparison to the no-expenses-spared lavish £3 million wedding.

Actress Eva Longoria was also in attendance and shared photos of herself on social media in a glamorous gown.

Eva and Gordon, together with tennis champ Serena, who wowed in neon pink on the big day, all attended a pre-wedding dinner bash on Friday night.

They will have dined with Brooklyn’s parents David and Victoria Beckham, who arrived at the wedding holding hands tenderly.

Victoria donned a similar dress to the ones Kendall Jenner and Paris Hilton each wore at their 21st birthday bashes, but with a key difference – she had adapted hers into a long and flowing gown version.

Spice Girls Mel B and Mel C were spotted in attendance when a lovestruck Brooklyn and Nicola made their vows of commitment to each other.

His farewell tour, marking the final time he will ever perform his music on a live stage, is currently in full swing, and he was due in Knoxville, Tennessee the night before, and Lexington, New York on the day of the wedding itself.

It would have meant an 11-hour road trip or a stressful connecting flight to meet the Beckhams in Miami, and so he was forced to pull out.

Poignantly for Brooklyn’s mum Victoria, Elton had been a trusted friend of hers for decades, even appearing in a cameo for the Spice World movie.

Admittedly the other Spice Girls might have been less thrilled with his influence, as Victoria has publicly name-checked him in Vogue magazine as the person who inspired her to leave the group behind.

“Remember years ago, watching your dear friend Elton John on stage in Las Vegas,” she recalled.

“He performed ‘Tiny Dancer’, as if it were the first time, and you realised this was like oxygen for him.

“It was a life-changing moment — while singing and dancing was fun for you, it wasn’t your passion.

“That day, you started your quest to uncover your own dreams. It was time to step away from being a Spice Girl.”

Though Saturday Night clearly wasn’t alright for Elton, unlike the words of his famous song, the star-studded bash went ahead, with the bride wearing a stunning Valentino gown.