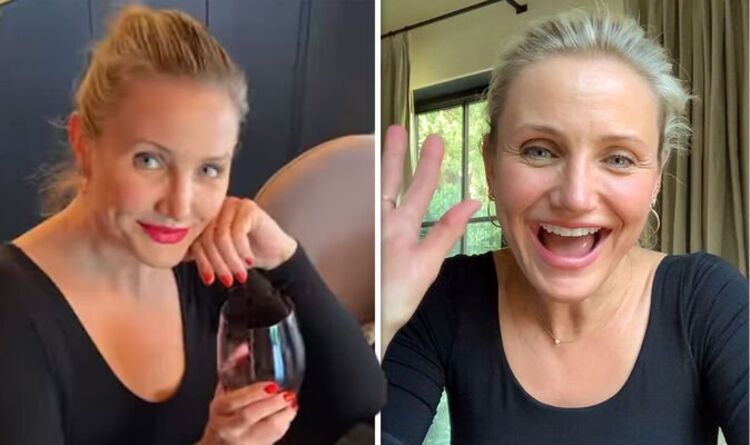 The 49-year-old actress was flogging her wine brand as she revealed the delicious-looking spread she was pairing the beverage with.

As jazzy French music played, the camera panned across plates of food including sour dough, tomatoes and berries.

Sitting at her dining table in a chic black long-sleeved top, Cameron poured herself a glass before resting her head in her hand and smiling mysteriously.

“It’s lox o’ clock!” she wrote, sharing the post with her 9.2million followers.

“I’m pairing @avaline red with lox, sour dough toast, pecorino and goat cheese, tomatoes with olive oil and salt, and a side of fresh berries!

“What are you pairing Avaline red with?”

Cameron recently attracted attention when she admitted she has thrown beauty standards out of the window.

The star has a minimal skincare routine despite looking radiant and youthful at almost 50 years old.

Speaking to Michelle Visage on her BBC podcast Rule Breakers, Cameron explained: “Again, I just go back to the trap of it all, especially in our society, like what we value, what we think is important.

The mum-of-one continued: “I am absolutely a victim to all of the societal objectifications and exploitations that women are subjected to.

“I have bought into all of them myself at certain times. It’s hard not to, it’s hard not to look at yourself and judge yourself against other markers of beauty, and I think that that’s one of the biggest things, the last eight years, girl, I’m like wild, I’m like a wild animal, I’m a beast!”

‘Can’t wait!’ The Repair Shop’s Will Kirk teases move away from show [UPDATE]
‘Can’t believe it’ Dick Strawbridge bids farewell to special show [LATEST]
Will Smith fires back at Rebel Wilson’s joke about his marriage [DEBATE]

She added that she simply “doesn’t care” about her appearance any more.

“No, no, I literally do nothing. I like never wash my face. Twice a month if I’m lucky.”

Cameron also admitted she owns “like a billion” beauty products that are collecting dust in her home.

Despite grossing billions of dollars in films including Shrek, There’s Something About Mary and The Holiday, Cameron decided to”semi-retire” from acting to spend time at home with her husband Benji Madden and their daughter Raddix, two.

She told Gwyneth Paltrow on In Goop Health: The Sessions: “It’s so intense to work at that level and be that public and put yourself out there.

“There’s a lot of energy coming at you at all times when you’re really visible as an actor. I’m sensitive to some energy and not others. I do get the overwhelming energy of the attention that’s being put toward me

“I really looked at my life and I saw what I had been — when you’re making a movie, it’s the perfect excuse, they own you — and I realised I handed off parts of my life to all these other people.

“They took it. I basically had to take it back and take responsibility for my life.”