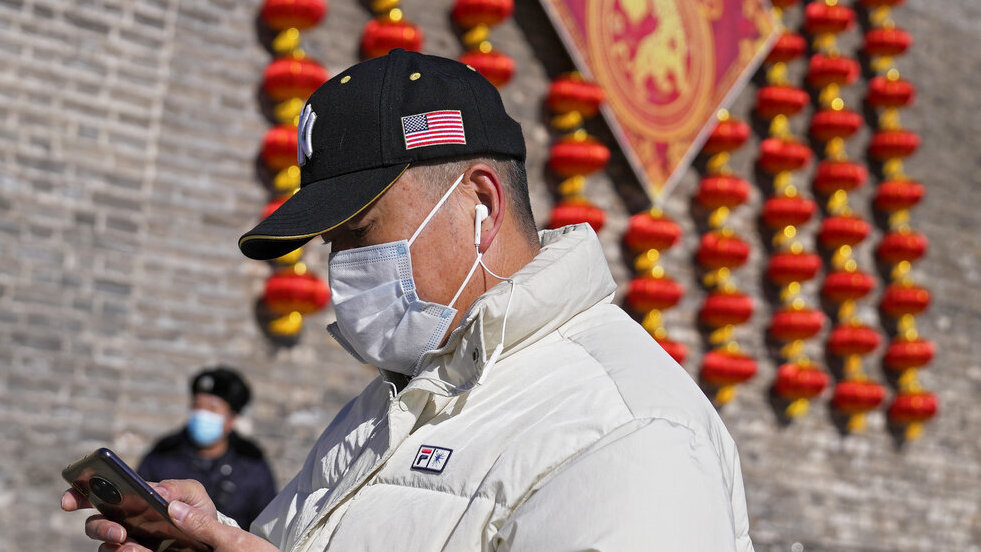 A man wearing a hat baring an American flag and face mask to help protect from the coronavirus walks by a masked security guard near lanterns decoration on the remnants of a city wall in Beijing, Thursday, Jan. 27, 2022.

A man wearing a hat baring an American flag and face mask to help protect from the coronavirus walks by a masked security guard near lanterns decoration on the remnants of a city wall in Beijing, Thursday, Jan. 27, 2022.

BEIJING — China is demanding the U.S. end “interference” in the Beijing Winter Olympics, which begin next month, in an apparent reference to a diplomatic boycott imposed by Washington and its allies.

The Foreign Ministry said Minister Wang Yi made the demand in a phone call with U.S. Secretary of State Antony Blinken on Thursday Beijing time.

The U.S. has said it will not send dignitaries to the Games, which begin on Feb. 4, in a protest over China’s detention of more than 1 million Uyghur Muslims in the northwestern region of Xinjiang, along with crackdowns on human rights elsewhere in the country.

The boycott does not prevent U.S. athletes from taking part in the Games, which are being held under strict anti-pandemic restrictions. China has also protested what it says are calls within the State Department to withdraw staff and their dependents from the embassy and consulates around China over the tightening rules.

According to a news release posted on the ministry’s website Thursday, Wang also called for an end to U.S. support for self-governing Taiwan, which China claims as its own territory.

Wang also complained that the U.S. hasn’t altered tough political and economic policies toward China under the administration of President Joe Biden, despite its expressed wishes for a less confrontational relationship.

A brief statement from the State Department said that Blinken and Wang exchanged views on how to manage strategic risk, health security and climate change. It did not mention the Olympics or Taiwan. Blinken underscored the economic and security risks posed by Russian aggression against Ukraine, the statement said.

The phone call follows the appointment of veteran diplomat Nicholas Burns as the new U.S. ambassador to China, a position that has remained empty for more than a year.