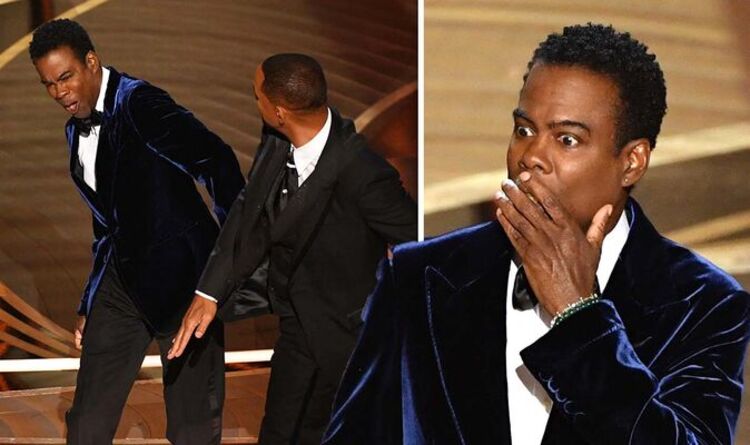 Chris Rock, 57, addressed being slapped by Will Smith, 53, when he took to the stage for the latest instalment of his stand-up show. Appearing in Indio, California, on Friday night, the Madagascar star assured the crowd he was “ok” and joked that his hearing had returned.

However, he told fans he would not divulge any more details until he “gets paid”.

The comedian said: “I’m OK, I have a whole show and I’m not talking about that until I get paid.

“Life is good. I got my hearing back,” as reported by California-based newspaper Desert Sun.

Chris’ joke comes after the Academy announced it was banning Will Smith for 10 years.

Following a meeting with the board of governors, Academy President David Rubin and CEO Dawn Hudson said in an open letter that this year’s Oscars were “overshadowed” by Will Smith’s “unacceptable and harmful behaviour”.

The duo also praised Chris Rock for his actions following the slap and his composure in continuing to present the award.

The letter said: “We want to express our deep gratitude to Mr Rock for maintaining his composure under extraordinary circumstances.

“We also want to thank our hosts, nominees, presenters and winners for their poise and grace during our telecast.”

Will admitted that his actions were “unacceptable and inexcusable” but said that a joke about his wife Jada Pinkett Smith’s alopecia was “too much to bear”.

The altercation was triggered when Chris made a joke about Jada’s shaved head while he was presenting the Oscar for Best Documentary.

Jada could be seen rolling her eyes before Will stormed onto the stage and slapped Chris across the face.

When he returned to his seat, Will shouted: “Keep my wife’s name out your f***ing mouth,” to the shock of the A-List audience.

Later in the evening, Will won the Best Actor award for his portrayal of Venus and Serena Williams’ father in King Richard.

“But love makes you do crazy things.”