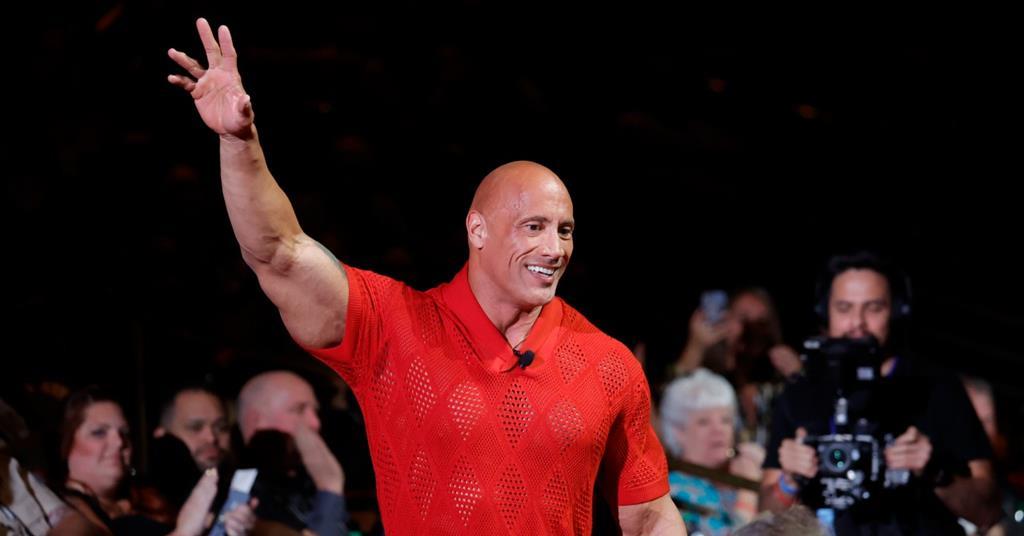 Emmerich called The Batman director Matt Reeves to the stage at the Colosseum in Caesars Palace on Tuesday (April 26) after announcing the unsurprising news, which drew sustained applause from attendees. The film has been hit not just in theatres but in the home, drawing some 4.1m viewers in its first week on HBO Max.

Early in the session Emmerich referenced Godzilla vs. Kong, the first pandemic era release to gross more than $100m in North America, hailed exhibitor attendees as ”the superheroes”, and acknowledged that David Zaslav, CEO of parent company Warner Bros Discovery, was a fan of theatre-going.

Ever the consummate showman Johnson, who stars for the studio in upcoming releases Black Adam (October 21) and DC League Of Super-Pets (July 29), tricked attendees by sending what appeared to be a recorded message from Hawaii before walking on stage to show footage from both tentpoles as the climax of the presentation.

Johnson said Black Adam was a passion project that had been 10 years in the making and declared, “It has been a dream of mine… Black Adam is one of the things in my life that gets me out of bed.” He added that director Jaume Collet-Serra saw the character as the Clint Eastwood of the superhero world, referencing Johnson’s favourite actor.

Johnson also took time to recognise Cineworld CEO Mooky Greidinger and Cineplex head Ellis Jacobs, among other exhibition executives. Emmerich presented Johnson, whose films have grossed more than $11bn worldwide, with the Entertainment Icon Of The Decade Award. Thanking Emmerich and attendees he said, “We are back.”

Earlier in the session Baz Luhrmann also endorsed theatrical experience when he talked to session host Aisha Tyler about Elvis (June 24) and showed a high-octane clip from the film, which chronicles Elvis Presley’s relationship with his manager Colonel Tom Parker. Austin Butler and Tom Hanks star. “You will see the classics,” Luhrmann said of his upcoming Cannes world premiere, “but we’ve also translated it for the younger generation.”

Butler, who sings all the Presley songs in the film, joined his director on stage. Luhrmann, an effervescent presence, enthused about theatre-going and said there was nothing he would not do to get one more ticket sold.

Helen Mirren joined castmates on Shazam! Fury Of The Gods (December 12) alongside lead Zachary Levi, Asher Angel and Adam Brody. Mirren said “I just had to be as mad as I could be” in the film as Hespera. “The character I play believes she is right… She is convinced of her righteousness… I’m not sure how much I’m allowed to talk about it.”

Tyler also cued up clips from Timothée Chalamet starrer Wonka as well as The Flash, DC Entertainment’s first multiverse feature production starring Ezra Miller, who was arrested for assault in Hawaii last week, and Michael Keaton as a version of Batman.

Aquaman And The Lost Kingdom lead Jason Momoa sent a recorded message from London to introduce director James Wan to the stage for early footage. The 2018 original grossed $1.15bn worldwide and ranks as the highest grossing DC film and hopes are high when the sequel opens on March 17, 2023. Wearing his producer hat Wan in turn introduced Gary Dauberman, the director of the remake of Stephen King’s vampire horror Salem’s Lot (September 9) who showed a clip.

Near the start of the presentation distribution heads Jeff Goldstein and Andrew Cripps talked up Legendary and Warner Bros’ Oscar-winning Dune and teed up a recorded message from the sci-fi adaptation’s director Denis Villeneuve. “I would not be able to fulfil my vision without your support,” he said to attending exhibitors in a recorded message sent from Budapest, where he is “deep” in pre-production on Dune 2.

The executives reminded attendees of a 2023 slate that includes Barbie (July 21), The Meg 2, Wonka, The Blue Beetle, The Color Purple, and animated feature The Lord Of The Rings: The War Of The Rohirrim.