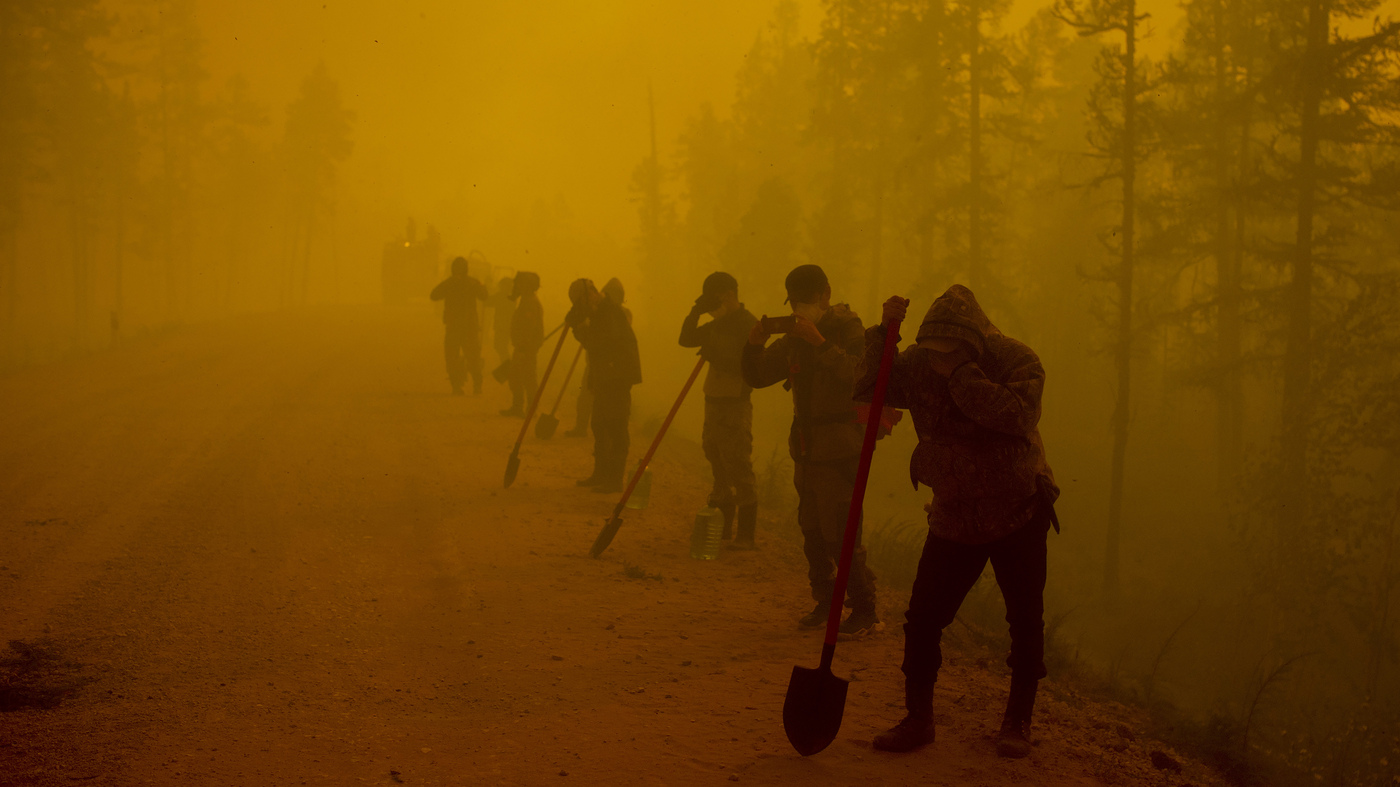 Portland residents wait inside the Oregon Convention Center, which was repurposed as an emergency cooling center during a heat wave in June 2021. Hundreds of people died in the Pacific Northwest due to the heat wave.

Portland residents wait inside the Oregon Convention Center, which was repurposed as an emergency cooling center during a heat wave in June 2021. Hundreds of people died in the Pacific Northwest due to the heat wave.

Billions of people on every continent are suffering because of climate change, according to a major new United Nations report released on Monday. And governments must do a better job of protecting the most vulnerable communities while also rapidly reducing greenhouse gas emissions.

The report by nearly 300 top scientists from around the world paints a picture of a planet already transformed by greenhouse gas emissions, and teetering on the brink of widespread, irreversible damage.

“People are now suffering and dying from climate change,” says Kristie Ebi, one of the lead authors of the report and an epidemiologist at the University of Washington.

That’s because heat waves, droughts, floods, wildfires, disease outbreaks and other dire effects of climate change are accelerating more rapidly than scientists expected in many parts of the world, including in North America. And as oceans, rainforests and polar regions heat up, nature is less and less able to help us with the task of adapting to a hotter Earth, the report finds.

Still, the authors of the report make clear, humans are not powerless. Repairing damaged ecosystems and reducing greenhouse gas emissions dramatically and immediately would spare billions of people from illness, poverty, displacement and death.

Some environmental changes are already irreversible

Some of the most delicate ecosystems have already been irreversibly altered by climate change, with serious implications for global warming later this century.

For example, coral reefs initially adapted to warmer water, but as oceans kept getting hotter in recent years, the reefs were overwhelmed and many have died. The same is true of polar, mountain, wetland and rainforest ecosystems, where temperatures have risen too quickly for plants and animals to adapt. Instead, species have gone extinct, or moved to places with cooler climates.

That ecosystem destruction will affect how much carbon dioxide lingers in the atmosphere, trapping heat.

For example, forests and tundra in North America and Siberia usually soak up carbon dioxide from the atmosphere. But the report notes that as those ecosystems thaw and even burn, they suck up less carbon dioxide and, in some cases, even end up emitting it.

For that reason, protecting natural landscapes far from human settlements is an important way to protect human life and health, too, the report notes.

“We need to keep natural systems in better shape to suck up carbon,” says Camille Parmesan, one of the lead authors of the report and a researcher at the University of Texas, Austin. “Emissions reductions alone are not going to be enough.”

There have been big advances in climate science since the last report of this kind was published nearly a decade ago. Scientists are now able to see the fingerprints of climate change on individual storms, wildfires and heat waves. Those connections allow epidemiologists, economists and social scientists to study the effects of global warming on human health and well-being.

The results are sobering. “Climate change has already affected the physical and mental health of many Americans,” says Sherilee Harper, one of the report authors and a researcher at the University of Alberta in Canada.

For example, climate change is dangerous for pregnant women, the report notes for the first time. Wildfire smoke exacerbates respiratory and cardiovascular disease. And the trauma of living through a weather disaster can cause long-term mental health problems.

The authors return again and again to the deadly effects of heat waves. Around the world, high temperatures are killing people and making them sick.

That is also true in the U.S. “Heat is the number one weather-related killer in the United States,” says Juan Declet-Barreto of the Union of Concerned Scientists. “The effects of extreme heat aren’t always visible which is something that makes people forget about them. But they are dangerous precisely because of that relative invisibility.”

Worldwide, poor people, Indigenous people and others who are marginalized are at the highest risk from heat, and from the effects of climate change more broadly, the report notes repeatedly.

“I think we have not done a good enough job focusing on the poor and vulnerable,” says Ko Barrett, one of the co-chairs of the U.N. Intergovernmental Panel on Climate Change, and a top climate official at the U.S. National Oceanic and Atmospheric Administration.

In the U.S., poor people and people of color are more likely to live and work in dense urban areas with limited green space where temperatures are significantly higher than the surrounding areas, with disastrous consequences.

Heat waves are particularly dangerous when they hit areas that are historically temperate, such as the Pacific Northwest, where hundreds people died in a heat wave last summer.

Volunteer firefighters rested west of Yakutsk, Russia in August 2021. Wildfires are getting more common in Siberia, undercutting the ability of the region’s vast forests to absorb carbon dioxide from the atmosphere.

Volunteer firefighters rested west of Yakutsk, Russia in August 2021. Wildfires are getting more common in Siberia, undercutting the ability of the region’s vast forests to absorb carbon dioxide from the atmosphere.

There is still time to control global warming

Scientists warn that humans must limit the rise in global average temperature to less than 2.7 degrees Fahrenheit (1.5 degrees Celsius) in order to avoid the most catastrophic effects of climate change. Global temperatures have already risen about 2 degrees Fahrenheit, or about 1.1 degree Celsius.

A previous U.N. report released last summer estimated there is at least a 50% chance that global temperatures will reach that 2.7 degree Fahrenheit threshold by mid-century. The new report digs into what that might look like. For example, there is a big difference between lingering briefly in the danger zone, and permanently camping out there.

If temperatures in some parts of the world exceed 2.7 degrees Fahrenheit briefly, before dropping again by mid-century, it’s still possible to avoid widespread irreversible changes. Damaged ecosystems could recover. Strained aquifers could be replenished.

But, the report notes, if humans allow global warming to linger above 2.7 degrees Fahrenheit for decades, the world will be transformed for centuries. Ice sheets and glaciers will not soon refreeze. Extinct species will not come back to life.

Preventing that kind of runaway warming requires dramatic cuts to greenhouse emissions in the next decade, which would require that humans stop burning fossil fuels in cars, trucks and power plants. The U.S. has been slow to reduce emissions in part because misinformation about climate change and the politicization of climate science has caused widespread public confusion about the true risks of global warming, the report says.

In reaction to the report, U.N. Secretary-General, António Guterres doubled down on that message, calling fossil fuels “a dead end.”

“Coal and other fossil fuels are choking humanity,” Guterres says. Fossil fuel companies, banks and investors are all complicit, he argues. “Those in the private sector still financing coal must be held to account. Oil and gas giants – and their underwriters – are also on notice.”