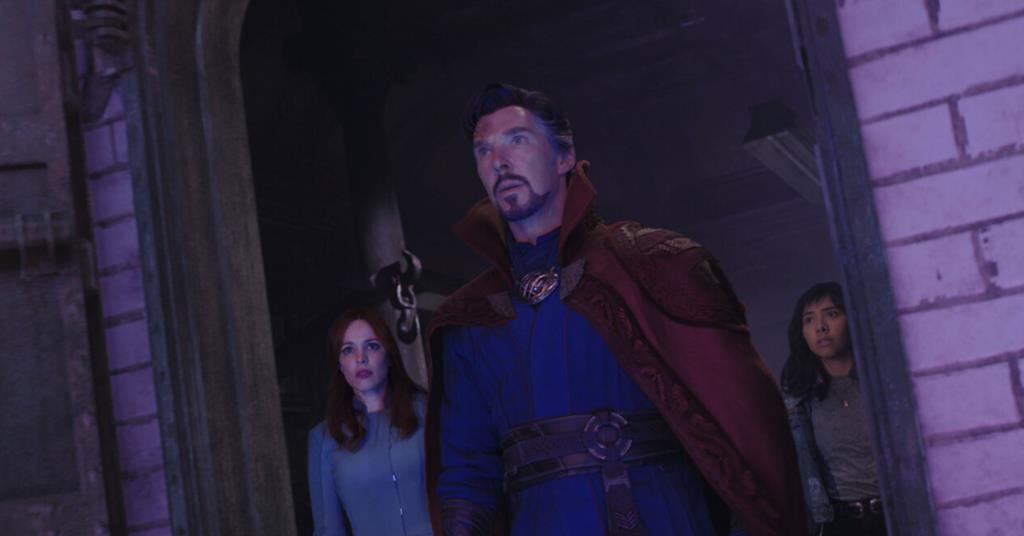 After just one weekend of play, Disney/Marvel Studios’ Doctor Strange In The Multiverse Of Madness is already a long way towards matching the total global gross of 2016’s Doctor Strange. The Sam Raimi-directed sequel has debuted with an estimated $185m in North America and $265m in 49 international markets, combining for $450m worldwide.

That compares with a $678m lifetime global total for Doctor Strange – which had the benefit of both Russia and China (grossing a combined $131.5m). The second Doctor Strange film has yet to be allocated a release date for China.

Doctor Strange In The Multiverse Of Madness has delivered the second-biggest opening for a US studio film in the pandemic era, as well as the biggest debut for any film in 2022. In like-for-like territories, it’s achieved the fourth biggest Marvel Cinematic Universe (MCU) opening of all time, behind only Avengers: Endgame, Avengers: Infinity War and Spider-Man: No Way Home.

In major market South Korea, the Doctor Strange film has delivered the biggest opening of the pandemic era (with an estimated $30.0m), as well as one of the top 10 biggest openings of all time. The MCU sequel likewise achieved the latter feat in fellow major markets Brazil and Mexico, as well as a number of smaller territories including Chile, Colombia, Turkey, Malaysia and Philippines.

The estimated $450m global opening compares with a $600.8m debut for Spider-Man: No Way Home back in mid-December – a 25% shortfall. However, in like-for-like markets, Doctor Strange In The Multiverse Of Madness is only 17% behind the earlier Marvel title. It’s also 126% ahead of The Batman and 160% ahead of Doctor Strange on a like-for-like basis at the same stage of release.

UPDATED: Universal’s release of DreamWorks Animation’s The Bad Guys achieved decent traction over the weekend, grabbing a confirmed $9.6m in North America (down 41%) and $7.4m for international (down 41%). Those numbers saw the film move up to second place in the global box office chart, ahead of two titles – Fantastic Beasts: The Secrets Of Dumbledore and Sonic The Hedgehog 2 – that had both eclipsed it the previous weekend.

The film was boosted by release in South Korea, opening last Thursday on the local Children’s Day holiday – and delivering a confirmed total of $1.9m for the four days. It also added $2.6m in China in its second weekend of play, once again topping the country’s box office. Total there after two weekends is $14.2m.

The Bad Guys is playing in 64 international markets. Japan welcomes the film in October.

UPDATED: In its second week of international play, Downton Abbey: A New Era expanded from 33 to 42 territories, grossing a confirmed $6.5m at the weekend, and taking the total to $22.2m. The nine new markets are all relatively modest in size, and are led by Finland (with $591,000 including previews) and Belgium ($190,000).

A New Era is now 23% of the way to reaching the $96.9m achieved by the original Downton Abbey film in international markets. That 2019 release matched its international haul with its North America box office, and reached $194m worldwide.

UPDATED: The fifth week of release for Warner Bros’ Fantastic Beasts: The Secrets Of Dumbledore saw the film tumble from first to third place at the global box office, with takings down 52% in North America and down 60% for international. Global total is now $364.7m.

The Secrets Of Dumbledore has so far reached 45% of the lifetime total achieved by Fantastic Beasts And Where To Find Them ($814m worldwide) and 56% of the total for The Crimes Of Grindelwald ($655m).

‘Everything Everywhere All At Once’ nears $50m worldwide

A24’s release of indie crossover hit Everything Everywhere All At Once experienced its biggest drop to date at the North America box office, falling 40% in its seventh week of release, with estimated takings of $3.3m. Domestic total is $41.6m, and globally it is $48.3m. The film lands in UK/Ireland this Friday (May 13), by which time it will already have reached $50m worldwide.