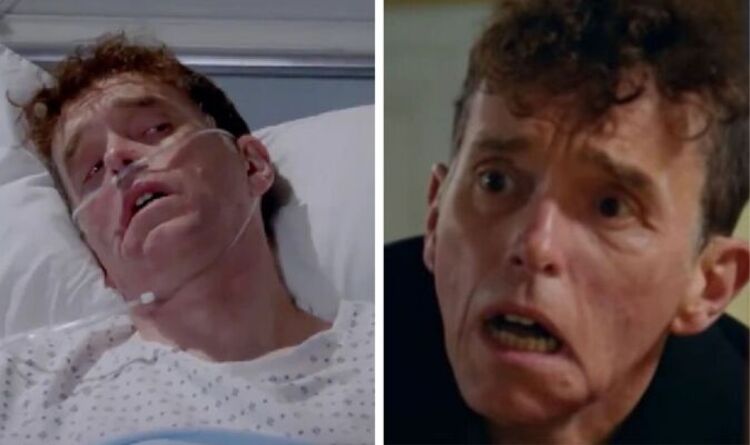 Mark Charnock, who plays Marlon Dingle in Emmerdale, broke fans’ hearts with a hospital storyline in which he languishes in a hospital bed, scarcely able to communicate, after suffering a stroke. Viewers were left at loggerheads over whether Marlon was asking for his teddy or a drink in one scene – and Mark has now confirmed it was the former.

The 53-year-old’s plight devastated fans, particularly when he appeared to reach out for a glass of water, only for an unresponsive nurse to leave the room without giving one to him.

His diminished ability to move or communicate distressed some sensitive fans.

The divisive issue of how his on-screen care was portrayed made waves on social media – until Mark stepped in to give a personal response.

@BantamCal tagged him in a request that began: “dear mark. Pls settle an argument with my friends.

“Especially as he only has minimal movement. #emmerdale”.

@page_lace30 expressed her feelings more bluntly, writing: “The nurse has not even considered if marlon needs a bl***y drink!”

The scene that sparked debate had clearly shown the stroke victim reach out his arm.

Though the majority seemed to believe he had been seeking a glass of water, he only succeeded in knocking the teddy bear off his bedside table.

Some felt the nurse was unresponsive to his attempts to communicate before she left the room, leaving some fans, like @angenevs to agonise: “Has Marlon had some water yet? It’s my worst nightmare, not being able to communicate and being thirsty.”

The world continued to debate why the Emmerdale star seemed not to have a call buzzer to help him get attention from staff.

However, despite the neglectful-looking scenes, Mark has now appeared to settle their concerns once and for all, confirming that all the forlorn Emmerdaler needed was a cuddle from his teddy.

Meanwhile @mishybabez_ added decisively of his stellar acting performance: “If @markcharnock doesn’t get any awards then something’s wrong. He is doing incredible in this heartbreaking storyline #Emmerdale x”