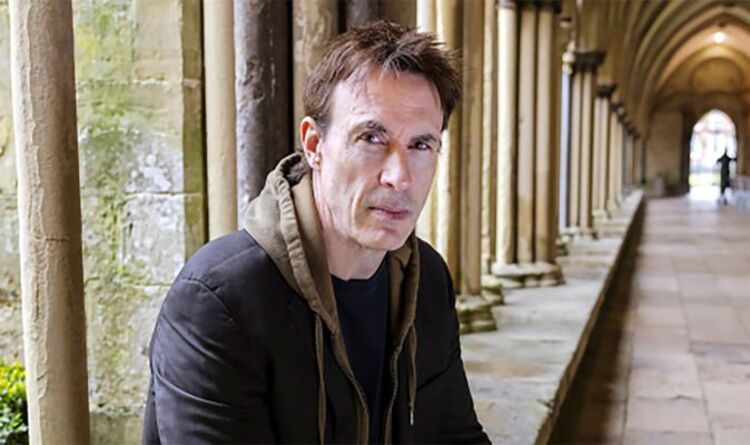 When Mark Griffin’s father was dying from dementia, he visited him most days in hospital. One afternoon, very close to the end, he propped 85-year-old Brian up on his pillows, gave him a drink of water and told him: “You’ll be fine, Dad. See you tomorrow.”

But as he walked into the corridor, his hard-won composure cracked. As the tears fell and he fought to regain control, a voice drifted through the open ward door. It was his father talking to a nurse, and he sounded as if he was about to burst with pride.

He recalls: “He was saying, ‘That was my son, Mark. Did you ever watch Gladiators on TV? He was on that, you know’.”

Of all Mark’s many achievements – champion squash player and bodybuilder, actor, Hollywood scriptwriter – the one that gave Brian the greatest joy, even cutting through the cruel fog of dementia, was his starring role as superhero Trojan in the smash-hit 1990s TV show.

These days, Mark has yet another success on his varied CV? thriller writer, with the third book in his detective series just published. But he’ll always have fond memories of the television competition on which he made his name.

The Gladiators were the superfit musclebound opponents standing in the way of contestants on the show – presented by Ulrika Jonsson and John Fashanu. Members of the public would take on Trojan, and a cast of glamorous male and female co-stars, including Rhino, Cobra, Wolf, Flame and Jet, in a series of sporting challenges.

“I was a different person then,” Mark smiles, “and it really does feel strange. But I’m glad I did it and I am glad I put my body through that because I think it’s good to push yourself and know how strong you can be.

“I met up with Helen O’Reilly (Panther) and James Crossley (Hunter) one Christmas and I loved hanging out with them because we were involved in something which we maybe didn’t realise at the time was special.”

Mark was always sporty. He represented Hampshire at squash and was invited to join the national squad before he switched to competitive bodybuilding.

He enrolled with Gladiators in series two in 1993 after a gruelling audition process. After leaving the show in 1996, Mark wrote about his time on it in a book called Trojan: My Life With The Gladiators, and then relocated to Los Angeles.

He worked as a scriptwriter and actor, appearing in the TV series Action Man and in films such as Daddy Day Care and Dr Dolittle 2. He also had TV roles in Curb Your Enthusiasm, NCIS and DoctorWho.

But in 2017, following a divorce, he returned to the UK. “I wasn’t enjoying it as much out there,” he says. “I renovated houses as well and the whole place had lost its sparkle, but I’m an American citizen so I can go back whenever I want for work – and I will, as well as to Canada.”

Back home, it was his mother Patricia who encouraged him to be an author.

“There was a national crime thriller writing competition sponsored by Random House and Mum spotted it and suggested I go for it,” he says. The book he entered wasWhen Darkness Calls, the first in his now bestselling series featuring Holly Wakefield, a criminal psychologist who works with the Metropolitan Police.

As a teenager, Mark had some success with his creative writing, winning the gold medal three years running in the Hampshire Festival but he didn’t have the confidence to pursue it then.

“I was obsessed with Star Wars – it just blew my mind and opened up my imagination,” says Mark, talking from his home in Sunburyon-Thames, Surrey. “All my early writing was fantasy sci-fi stuff and I loved Sherlock Holmes.”

The dedication in his latest novel is to his former English teacher. “I wrote a comedy short story at school,” explains Mark, “I was about 12 and he read it out in class and he was laughing, tears-in-his-eyes sort of laughter. And he told the class, ‘That’s an example of good writing’, and those words have always stuck with me. I remember that day really clearly.”

It took him many years to fulfil that early promise, but at 54 he feels he is just about hitting his stride.

Brimming with energy and ideas, he reels off a list of projects he’s working on.

“I want to carry on working,” he says. “That’s the great advantage of being a writer; there’s basically no retirement age. I want to direct more as well – I’ve directed a few plays – I’m writing a short film at the moment I’m going to direct, and I am writing two more books.”

The one thing he does miss about America is living in what he sees as the creative hub of Los Angeles.

“I was always hanging around creatives because you go to a dinner over there and the people who serve you are all actors and it’s an intense atmosphere where you feel like anything can happen at any second and you don’t get that in the UK,” he says.

He believes that overall the standard of TV and film production and writing in America is better than in the UK, with some striking exceptions.

“I love the simplicity of After Life,” he says. “Ricky Gervais’s script is brilliant and you’ve got these incredible shows that the BBC and ITV produce like Downton Abbey and Peaky Blinders.”

The Holly Wakefield series started off as a play, Holly Bell is Missing, and ran to just 5,000 words. When he turned it into a novel for the competition, Mark had no idea it would launch him as a popular and respected author.

“About six months after entering, I got a phone call from a guy who’s now my literary agent who said, ‘You’ve been shortlisted. I want to represent you – congratulations!’

And the rest is history,” he smiles. He has just published his latest Holly Wakefield book -When Silence Kills.

But he doesn’t want to put all his eggs in the writing basket is because “it’s incredibly lonely”. “You’re in front of your keyboard all day, and you’re putting yourself on that page which I love.You feel for your characters and you want them to do well, but I miss the visceral connection you get with someone on screen or on the stage and you rarely get that with writing.”

Above all, he would hate to be pigeonholed. “That’s a very English thing. Whereas in America there’s a lot of excitement around a new project, here nobody believes you can do anything until you’ve already done it. People are so cynical and jealous.

“I hate social media at the best of times but when I got my publication deal, people were writing to me saying, ‘Oh, it’s so lovely that you found someone to write books for you and then they’re going to put your name on it’.

What is happening where you live? Find out by adding your postcode or visit InYourArea

“I’ve been writing since I was 10 years old – why would people write that? People just want to judge you, don’t they?”

For someone accustomed to achieving what he has through sheer hard work, it clearly rankles.

“I work hard. I am pretty strict with myself and that discipline comes from me having been involved in athletics. When I was competing, if someone lifted the dumbbells 100 times then I lifted them 120 times.”

Although Mark no longer has a bodybuilder’s physique – “and no, before you ask, it doesn’t all turn to fat” – he still works out most days.

“I get up, have coffee, go to the gym and then just work all day, sometimes until four in the morning.”

While he credits bodybuilding for giving him the confidence to succeed, he says that Gladiators feels like a different life now.

Do people still recognise him as Trojan? “Yes, now and then and they will come over and say, ‘Hi, Trojan!’ or people give you that look which is a couple of seconds too long.”