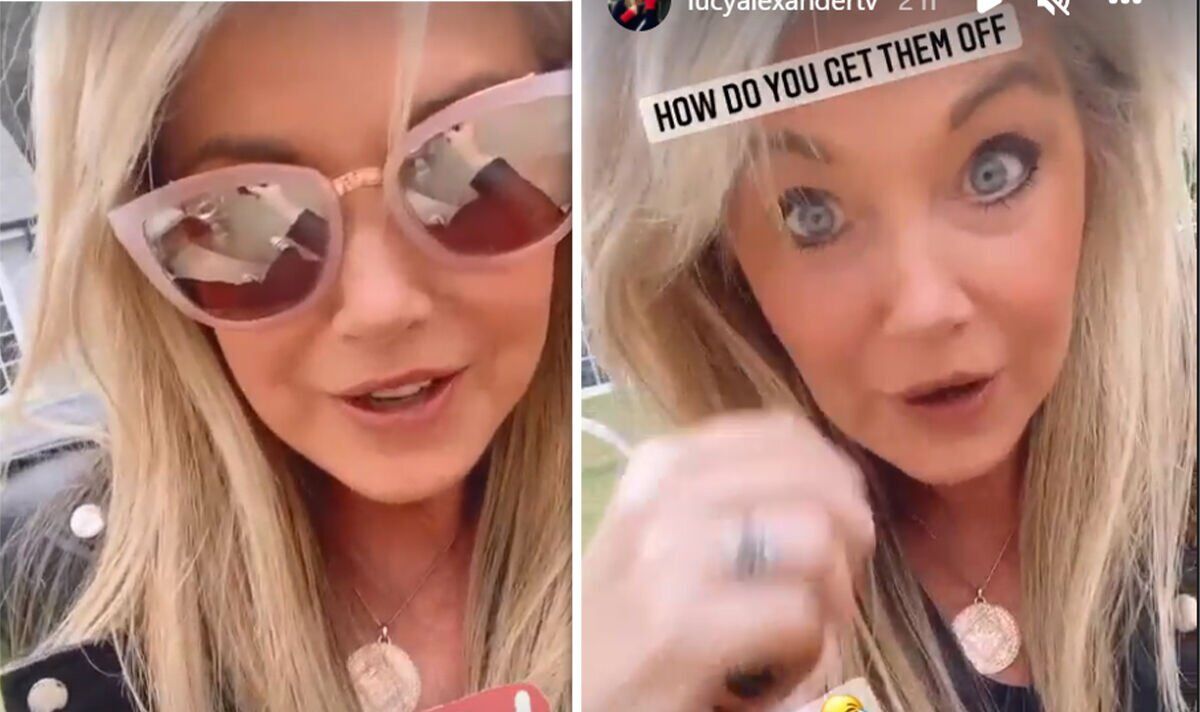 Lucy Alexander, 52, presented on Homes Under The Hammer from its launch until 2015 alongside Martin Roberts. The presenter has taken to Instagram to ask her followers for help after noticing while heading out of the house that the security tag is still on her leather jacket.

Lucy shared the video clips on her Instagram story in view of her 57,200 followers.

Sitting in her garden, she said to the camera: “Good evening! Bit of a dilemma, just realised.

“I’m about to walk out the door, new leather jacket and this has happened.”

Lucy then moved the camera away from her face to show the side of her new leather jacket that can be seen to have a large red security tag on it.

READ MORE: Inside Paul O’Grady’s tranquil life on his own idyllic farm

The former BBC presenter laughed, while she took her large pink sunnies off her face and placed them on her head.

She continued: “Still got the tag on the b****y jacket. Does anyone know how to get them off? Can you help me please?”

The video then ended, with a new video starting with Lucy appearing to be back in the house recording the jacket on a table.

She added: “So what are the chances of that? Didn’t obviously beep when I went out of the shop a month ago, but there it is.”

She issued a warning after discovering that someone had been trying to connect with fans using a fake version of her own alias.

The fake account, with the name, lucy_alenxander, appeared online with a profile message claiming that it was an “official back-up account”.

Lucy’s fake profile also included a link to the star’s real-life account, to trick fans even further into believing it was her.

The ploy seemed to have been successful with some, as the account had accumulated more than 50,000 followers by the time the real Lucy caught sight of it and screenshotted it.

Fake profiles can be used for a huge number of nefarious purposes, including data mining, catfishing and fraud, although it was unclear what the motive of Lucy’s impersonator could be.

The star regularly posts from her real account to document details of her life with her daughter Kitty.

Last week, she published a photo of the pair spending their bank holiday weekend at a “beautiful country house hotel” while “being silly in the mirror”.

She has also used Instagram to share details of how her beloved Kitty was first struck down with the virus that robbed her of the ability to walk.