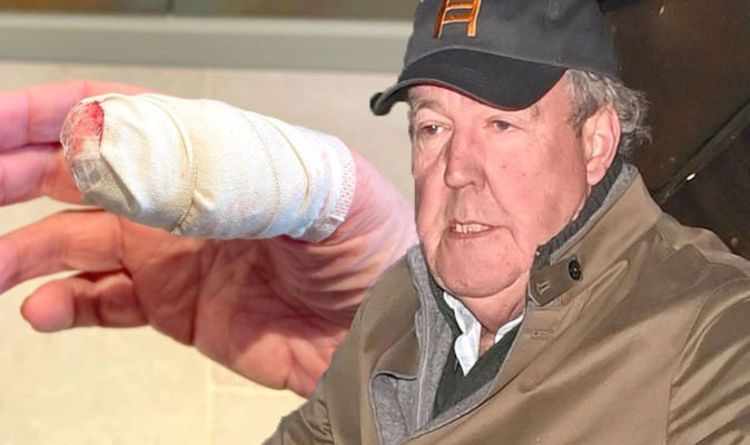 Jeremy Clarkson was hospitalised on Monday after a dramatic kitchen mishap. The Grand Tour presenter sliced “half” his thumb off and was warned he could lose use of it if he didn’t seek sufficient medical help.

Today, the 61-year-old recalled what happened in his latest column, saying he was still in a lot of pain.

The Top Gear star first told fans he had suffered an injury five days ago.

However, he didn’t not go into specifics, simply uploading a picture of his bloodied digit wrapped up.

“Ow,” he simply captioned the upload in view of his 4.2 million Instagram followers.

But now he has explained how it came about, and saw him go to hospital for treatment.

He and girlfriend Lisa Hogan were practising making chilli-flavoured crisps to sell at Diddly Squat Farm at the time.

Jeremy’s horrendous mishap was all down to him using a mandolin to slice the potatoes, before slicing his hand open too.

He got a shock as he plunged his injury into cold water, admitting: “Bone is normally surrounded by warm blood and flesh.”

Instead they called a local doctor’s firm, but Jeremy was issued with a stark warning.

He said: “The doc explained that I could lose the use of it, and since the opposable thumb is all that separates us from goats, I decided I’d better do as I was told.”

The TV regular was sent to hospital in Oxford, where he had 40 stitches to reattach his digit.

He added in The Sunday Times: “Today it’s a different story because the anaesthetic is beginning to wear off and it hurts like a b*****d.