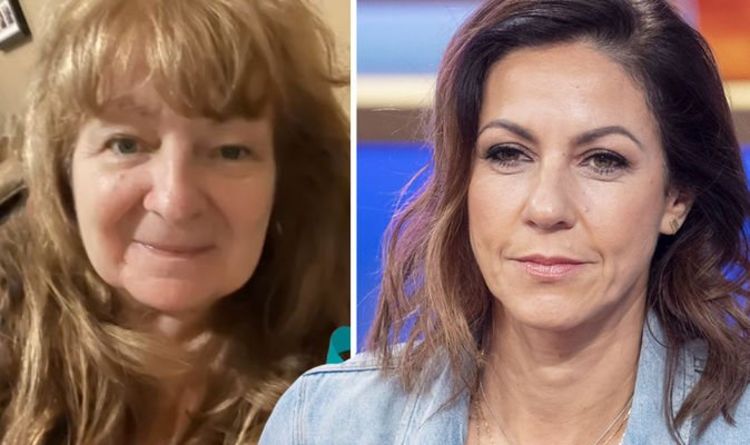 Julia Bradbury, 51, was in awe of Scottish comic Janey Godley, 60, who penned a letter of thanks to the NHS after having a full hysterectomy on 6 January to remove the tumour that she nicknamed “Bunty”. The award-winning comedian was diagnosed with ovarian cancer in November and her daughter has now confirmed she is recovering from her recent operation.

A total hysterectomy removes all of the uterus, including the cervix and in some cases, the ovaries and the fallopian tubes.

Sharing her story on her social platforms, Janey paid tribute to the nurse who looked after her in the days after the surgery.

She wrote: “On my first day of waking up from the hysterectomy, a wee lady NHS carer walked me to the toilet on shaky legs.

“She carefully undressed me through wires and tubes, showered and dried my body, then patted my face as I cried on plastic shower seat & said ‘you’ll be ok hen’.

READ MORE: Richard Hammond reunites with car that almost killed him 15 years ago

“The sheer careful gentle love & attention that wee woman showed me will stay with me forever.

“You’ll pass her on the bus as she gets on with her mask & wee bags and heads home after her shift, she’s got a wee dog and a granddaughter she looks after & she’s good at brushing hair.”

Julia shared a snapshot of the post on her Instagram story, in view of her 189K followers.

Since her diagnosis, Janey urged women not to dismiss symptoms of ovarian cancer and following her example Julia shared a series of posts to raise awareness of the relentless disease.

She visited the Hive installation at Kew Gardens and said it was the “perfect” place for her.

Sharing the news on Instagram, Julia wrote: “The Hive has been created to remind us of the powerful role bees play in sustaining life.

“PS one of my first days out with the fam since my op & have to say it’s the perfect place for me. Them.

She also sent Sky News’ Jacquie Beltrao a heartfelt message of support after she received a bone injection.

The former Olympian explained to her 87,700 Twitter followers: “Bone injection day – it takes half an hour. I have no idea what’s in it but I trust the science.

“It’s my choice but I’ve always found survival to be the key to saying ‘yes’ to treatment #chemounit #scienceisamazing.”

Julia responded to Jacquie to praise her for her “good attitude” towards treatment, adding that she hopes she feels OK.