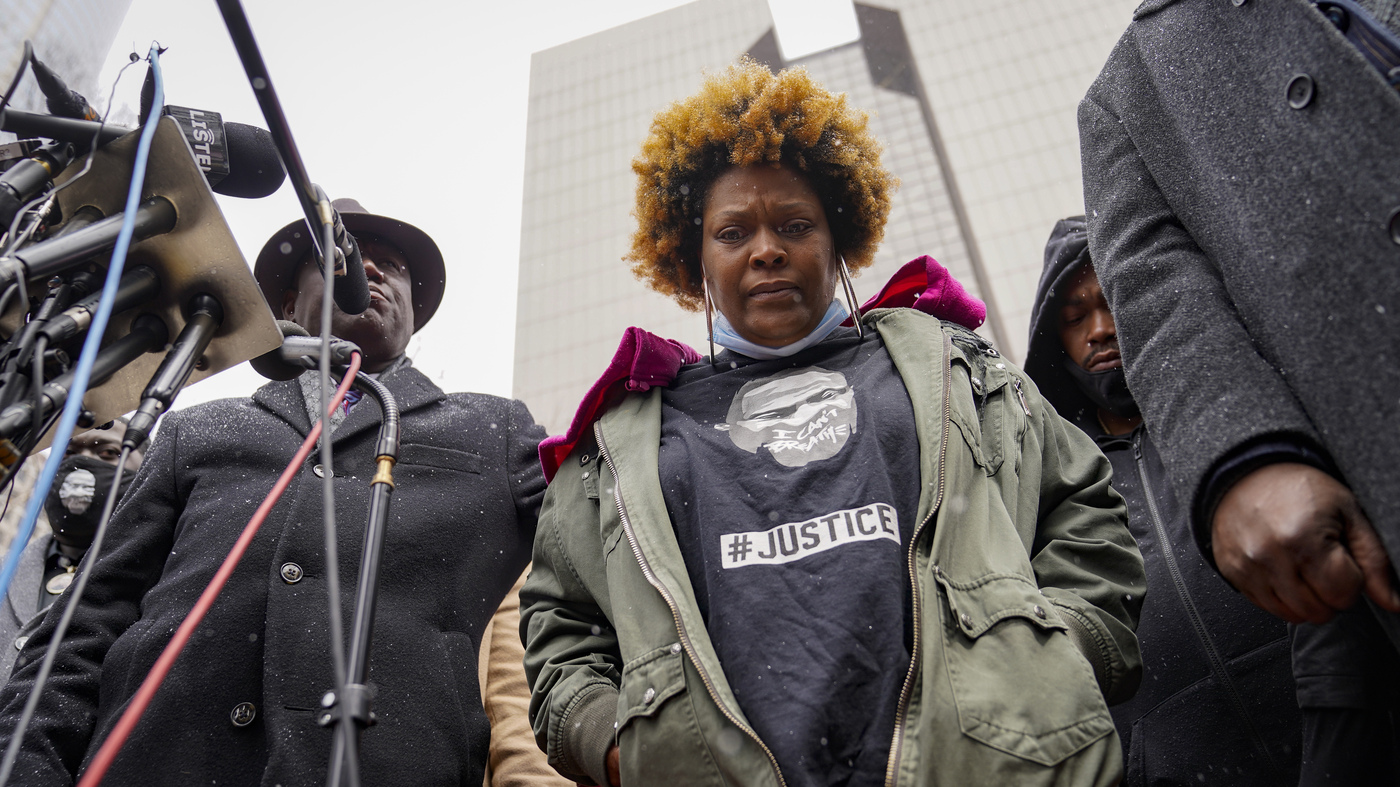 Naisha Wright, aunt of Daunte Wright, pauses after speaking during a news conference in April, in Minneapolis. Wright tells NPR that true justice would be to bring Daunte Wright back, but that Potter’s conviction provides accountability.

Naisha Wright, aunt of Daunte Wright, pauses after speaking during a news conference in April, in Minneapolis. Wright tells NPR that true justice would be to bring Daunte Wright back, but that Potter’s conviction provides accountability.

The family of Daunte Wright says the conviction of former Minnesota police officer Kim Potter in Wright’s death is a “bittersweet” moment ahead of the Christmas holiday, when “what we’ll be able to look at is his urn on top of the fireplace.”

Potter, who served as a police officer in Brooklyn Center, Minn., for 26 years, mistook her handgun for a Taser and fatally shot 20-year-old Wright during a traffic stop in April.

On Thursday, Daunte Wright’s mother Katie Bryant said she felt “every single emotion that you could imagine” as she heard the verdict. “I kind of let out a yelp, because it was built up in the anticipation of what was to come,” she said.

Minnesota Attorney General Keith Ellison, who prosecuted the case, praised the verdict on Thursday but said it does not represent “justice.”

“Accountability is not justice. Justice is restoration. Justice would be restoring Daunte to life and making the Wright family whole again,” he said.

Naisha Wright echoed the sentiment on Friday, telling NPR: “Justice would have been if we could have got him back. We at least feel happy that there was some accountability. But justice? If we could change the system, that’s justice.”

Daunte Wright left behind a son who was 1 year old at the time Wright was killed. “Daunte Jr. will know who his father was,” Naisha Wright said.

“He’s a part of history. So Daunte Jr. will know everything. That beautiful smile his father had. The excitement that his father had when he was born. Everything,” she added.

“I think that we are making progress,” he said in regard to the impact of the latest verdict.

“It’s difficult to believe that in February, it will be 10 years since Trayvon Martin was profiled, pursued and shot in the heart as he walked home with a bag of Skittles and a can of iced tea from the 7-Eleven” by George Zimmerman, a neighborhood watch volunteer.

“And so, in February, we all will be saying, Trayvon Martin, 10 years later, how far has America come in its quest for racial justice? And I think the recent verdicts of guilty regarding the killers of George Floyd, Ahmaud Arbery and most recently, Daunte Wright, will make a profound proclamation of the progress that we’ve made.”