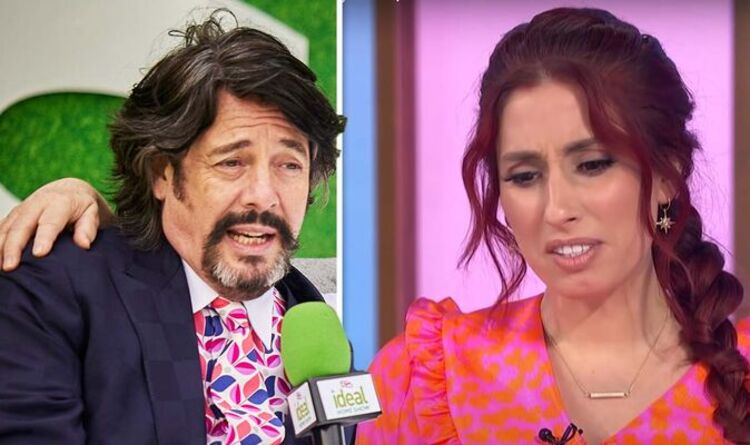 Laurence Llewellyn-Bowen, 57, quipped that Stacey Solomon, 32, may go incognito at this weekend’s Ideal Home Show as the Changing Rooms star gives his interior design tips. The designer made the comments during an exclusive interview with Express.co.uk.

When asked for his thoughts on celebrity influencers like Stacey and her friend Sophie Hinchliffe (Mrs Hinch) offering decorating advice to fans, Laurence jibed: “I haven’t seen their work…. but I’m sure they’ve seen mine.

“Who knows they may be in the audience at one of my talks at this year’s Ideal Home Show in disguise.”

The TV personality said that he wishes avid DIY-ers would steer clear of “Stacey Solomon grey” and show off their personalities instead.

Walking the red carpet for the Together For Short Lives Ball in November, he spoke to The Mirror and urged Stacey to: “Move on from the bl***y grey.”

In his new interview with Express.co.uk, Laurence also divulged on Channel 4’s Changing Rooms reboot, which has been renewed for a second season.

The show is famed for its unique transformations and Laurence has admitted he gets “very little information” about the homeowner’s taste before the overhaul takes place.

He explained: “I work very hard to evolve the design that I’m creating for them.

It comes as Laurence will be appearing at the Ideal Home Show, in partnership with NatWest, on Saturday.

This year marks Laurence’s 10th anniversary at the show.

Sharing his excitement, the flamboyant TV star said: “I’m so looking forward to being back at the Ideal Home Show.

“Oh my God, hasn’t it been appalling the last few years cowering in our homes waiting for the pandemic to pass without the show.

“It’s been very difficult to really get the levels of inspiration and excitement that this British institution has always brought to our homes.

“As it’s my 10th anniversary year of being involved and the fact that the show is finally back it seems it’s very important to be part of the celebrations, to be frank, it wouldn’t be a party without me!”

The Ideal Home Show, in partnership with NatWest, the world’s longest-running home and interiors exhibition, is at Olympia London until Sunday 27th March. Laurence will be at the show on Saturday 19th March.