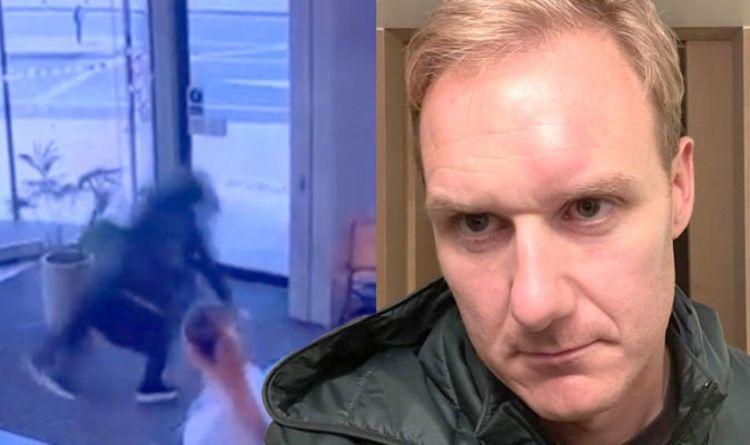 Strictly Come Dancing 2021 competitor Dan Walker revealed that he almost had to forgo the competition entirely due to sustaining a brutal injury, before he was even announced on the show. The BBC Breakfast presenter, 44, took to Instagram to share a video of the dramatic moment with his 263,000 followers.

The clip saw Dan on the phone, running to the door before abruptly colliding with the glass pane.

The presenter then shared a series of photos that showed the huge lump that had formed on his head afterwards.

Next to the post, Dan wrote: “I’ve got some amazing memories from #Strictly but I’ll never forget that it nearly ended before it even began!

“This was the incident which led to a brain scan back in September!

“Staff at the hotel and A&E were great & I was OK to return to training after a 3 day break.

“I’d left my wallet in the taxi but completely ignored the massive glass panel in the way while I was running outside before the car drove off.

“There was an immediate cartoon bump and blood where my teeth burst my lips but thankfully it wasn’t as serious as it looked.

“I had the scan and was told to rest. @nadiyabychkova was lovely & came with me to A&E but had to hide in the car park for hours because we hadn’t been announced on the launch show at this point,” he added with a laughing emoji.

Some of his followers in the Instagram comments section were sympathetic, although many more chose to see the funny side of his injury.

“Love that you got the footage and shared!” wrote former Strictly pro Brendan Cole.

Joanne Lee wrote: “Sorry but that made me laugh today.”

“I have to say I have laughed a few times at that video now. Poor you! X,” added Katie Vaine.

Some followers were left with questions, including clothing brand Signature Bespoke who asked: “Did you get the wallet back?”

The BBC’s Caroline De Moraes commented: “Bless you – but biggest question is: Did you get your wallet back?”

Dan Walker can be seen presenting BBC Breakfast alongside Sally Nugent on Monday through Wednesday from 6am on BBC One.