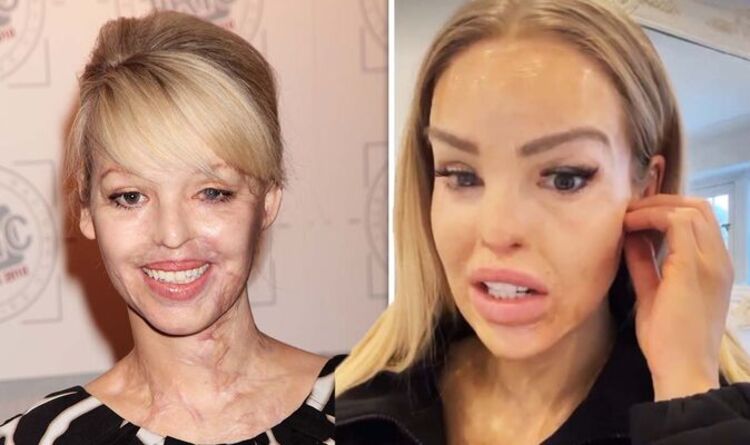 Katie Piper, 38, suffered life-changing burns after an acid attack in 2008 when she was aged just 24. The Loose Women panellist was left partially blind with severe scarring to her face, neck, chest, arms and hands. Katie has since undergone more than 400 surgeries in a bid to reconstruct her face.

Discussing her recovery, Katie detailed the extent of the damage caused by the incident.

The model revealed all to Lorraine Kelly and her daughter, Rosie, on their What if? Podcast.

The TV personality explained: “Because it’s a corrosive substance, you think with fire you can put it out and maybe minimise the damage, but with me all four layers of the skin were destroyed.

“The subcutaneous layer, which is the fatty layer, was also destroyed.

“My burn went through the muscle and down to the skeleton, so it was a very, very deep burn.”

Katie went on to detail the “pioneering procedure” which restored her face.

She said: “What I had to do was have all of my old face removed because the tissue was dead and would have gotten infected.

“They had to start from the beginning with a man-made dermal substitute. I always think of the analogy of a house, when you get the foundations before you get the bricks and the scaffolding.

She laughed and said she now has to get her face threaded otherwise she will look like a “fuzzy peach”.

The entire surface of her face was reconstructed, with many features being made from other parts of her body.

Katie explained that her nose is made from her upper-right rib, her eyelids are made from her groin and cheeks, and she has had hair transplants to form her eyebrows.

Katie also said all her treatment was provided by the NHS and commended how “amazing” they were.

It comes after the Loose Women panel member was awarded an OBE last month for her services to charity and victims of disfigurement injuries through her work with the Katie Piper Foundation.

As she received the honour from Princess Anne at Windsor Castle, Katie described the moment as “one of the happiest times” of her life.

She said: “Trauma is part of life but it doesn’t have to be a life sentence. This is a very special time for my family, my teammates, all survivors of burns and me.