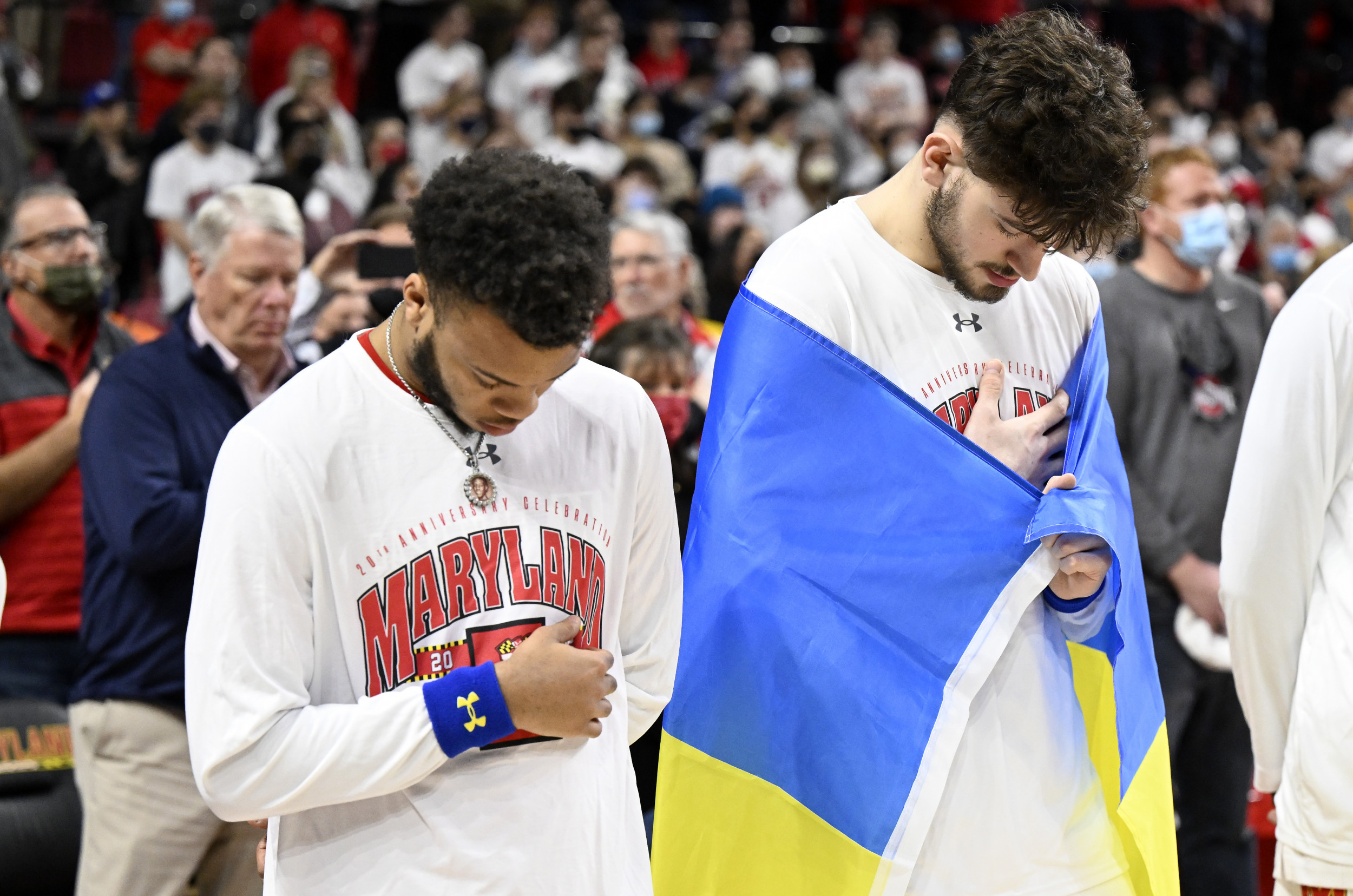 A college basketball player was met with cheers over the weekend as he stepped on and off the court while holding Ukraine’s flag over his shoulders.

Pavlo Dziuba, a forward on the University of Maryland’s Terrapins men’s basketball team, was born in Kyiv and brought the flag onto the court with him in support of his home country following Russia’s invasion last week. Dziuba’s display of support came as some international sports organizations moved to restrict Russia’s participation in competitions by banning athletes and discouraging displays of the Russian flag.

The University of Maryland’s team Twitter account began posting content demonstrating its support for Dziuba and Ukraine shortly after Russia’s invasion began. In a February 24 post, the team shared images of basketball shoes marked with messages reading, “pray for Ukraine,” “no war” and “peace,” along with the hashtag #StandWithUkraine, Dziuba’s name, and blue and yellow emoji hearts, the colors of the Ukrainian flag.

In another post by the team, Dziuba appeared in a photo standing with the Ukrainian flag stretched out behind him. The post also contained a photo of Alex Len, a former University of Maryland player and currently one of two players in the NBA originally from Ukraine.

“A great tragedy befell our dear homeland Ukraine,” the athletes’ statement said. “We categorically condemn the war. Ukraine is a peaceful, sovereign state inhabited by people who want to decide their own destiny. We pray for our families, friends, relatives and all the people who are in the territory of Ukraine.”

“We hope for an end to this terrible war as soon as possible,” their statement continued. “Dear fellow Ukrainians, hold on! Our strength is in unity! We are with you!”

The Sacramento Kings held a moment of silence in support of Ukraine ahead of the team’s February 24 home game against the Denver Nuggets. Len’s and Mykhailiuk’s teams were both scheduled to play separate games Monday evening.

At a home game over the weekend, Dziuba appeared in a video later shared on his team’s Twitter account ahead of their Sunday game. In the video, Dziuba stepped onto the court with Ukraine’s flag draped over his shoulders as the crowd cheered his team’s entrance.

“Pavlo representing his nation,” the team’s tweet said. “Our hearts are with him.”

A video shared by CBS Sports similarly showed Dziuba later heading off the court with his teammates while holding the flag above his head as the crowd cheered.

Newsweek reached out to the team for further comment.

Russia’s attack on Ukraine last week was described by U.S. President Joe Biden as a “brutal assault” that began “without provocation, without justification, without necessity.” Sports organizations representing countries around the world began discouraging competitions from admitting Russian athletes in the wake of the invasion.

On February 25, the International Olympic Committee (IOC) encouraged other sporting organizations to move or cancel events initially scheduled to take place in Russia and in Belarus, a Russian ally, citing the speed of the invasion as a violation of the Olympic Truce in the wake of the Beijing 2022 Winter Olympic Games. The IOC took one step further on Monday by recommending a temporary ban of Russian and Belarusian athletes from competition.

FIFA also released a statement on Monday barring Russian teams from competing, a ban that could block Russia from participation in the 2022 FIFA World Cup. The National Hockey League (NHL) similarly said on Monday that it is “suspending our relationships with our business partners in Russia” and “pausing our Russian language social and digital media sites,” with potential future games in Russia also no longer under the league’s consideration.