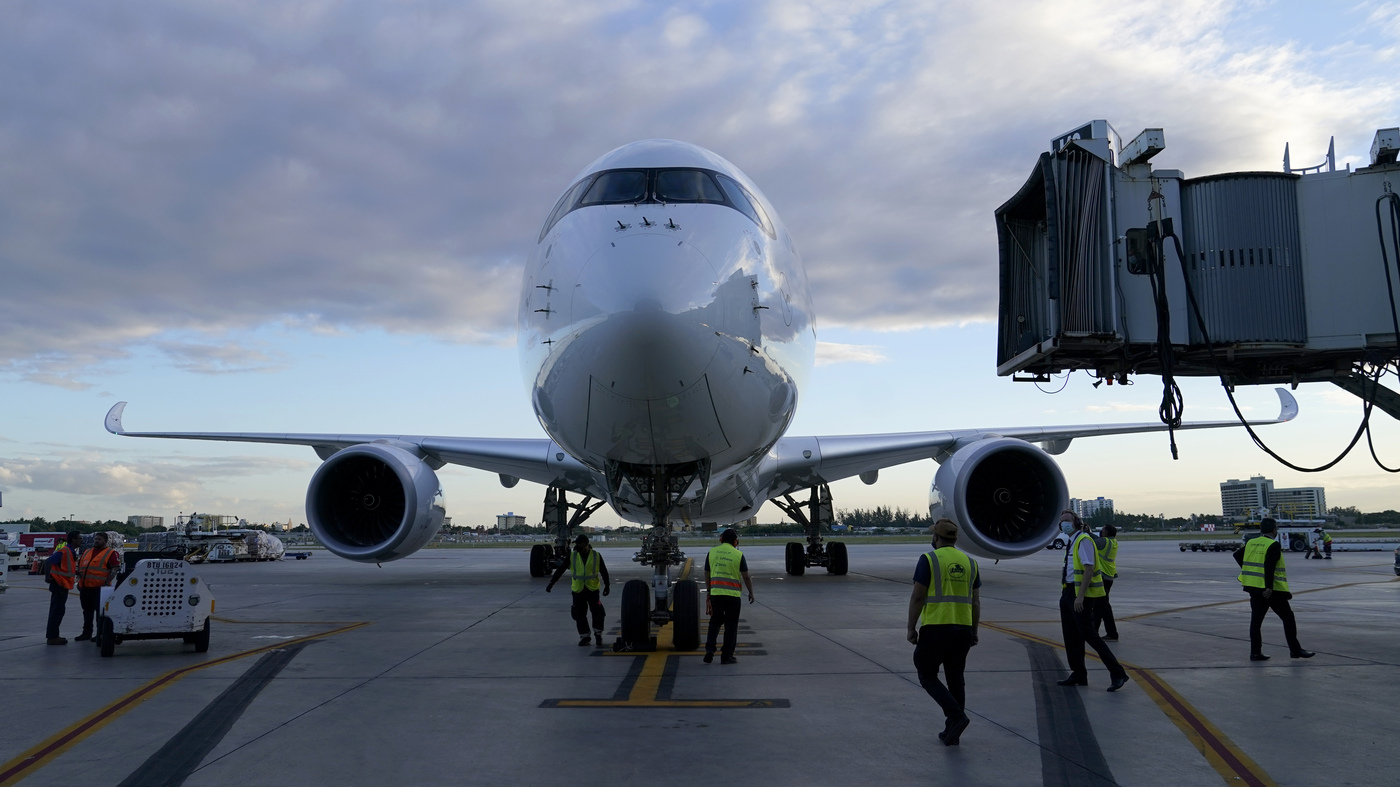 A Lufthansa flight arrives at Miami International Airport last month. The German airline, along with United and Delta, reported canceling dozens of Christmas Eve departures as illnesses tied to the omicron variant of COVID-19 take a toll on flight crew.

A Lufthansa flight arrives at Miami International Airport last month. The German airline, along with United and Delta, reported canceling dozens of Christmas Eve departures as illnesses tied to the omicron variant of COVID-19 take a toll on flight crew.

As if this second holiday season of the pandemic wasn’t hard enough, many looking forward to seeing family and friends for Christmas were informed at the last minute that their flights had been cancelled. A main reason is that the highly contagious omicron variant of coronavirus has left airlines short-staffed.

“The nationwide spike in Omicron cases this week has had a direct impact on our flight crews and the people who run our operation,” said United Airlines in a statement to NPR.

The airline said it had cancelled more than 175 flights for Friday and 69 on Saturday, and was notifying customers before they arrived at the airport. “We’re sorry for the disruption and are working hard to rebook as many people as possible and get them on their way for the holidays.”

Likewise, Delta Air Lines cancelled around 145 flights for Friday. It said some were due to potential bad weather, but also noted the impact of the omicron variant on its crews.

“Delta teams have exhausted all options and resources — including rerouting and substitutions of aircraft and crews to cover scheduled flying,” Delta said in a statement to NPR. “We apologize to our customers for the delay in their holiday travel plans.”

Delta said it was also working to rebook travelers.

According to Flightaware, nearly 3,400 flights were cancelled worldwide on Friday and Saturday. While more than half of the cancellations came from Chinese airlines, about 20% were from U.S.-based carriers.

Germany-based Lufthansa also canceled a dozen transatlantic flights citing a “massive rise” in sick leave, though the airline said it couldn’t confirm whether that was related to COVID-19.

On Thursday, Airlines for America (A4A), a lobby group for airlines, wrote CDC director Rochelle Walensky asking for changes that could ease staffing shortages. The letter says current guidelines call for 10 days of isolation for flight crew. But A4A wants that to be shortened to 5 days from the onset of symptoms for those who experience a breakthrough infection.

“Current medical data suggests that Omicron is 25% to 50% more contagious, but likely less virulent and milder symptoms particularly among people who are fully vaccinated,” the lobby group wrote, noting that the latest variant seems to have a shorter incubation period and infectious period for vaccinated individuals.

On Thursday the U.S. shortened COVID-19 isolation rules for health care workers only.

The holiday cancellations are just the latest challenge for an airline industry only beginning to recover from the Thanksgiving holiday — its busiest week since the pandemic began. To accommodate the surge in Christmas travelers, some airlines had offered employees incentive pay to work extra hours or not call in sick.

Despite the ongoing omicron-fueled COVID-19 surge, the Transportation Security Administration said it expected to screen some 30 million passengers from Dec. 20 through Jan. 3. That compares to nearly 44 million during the same period prior to the pandemic.