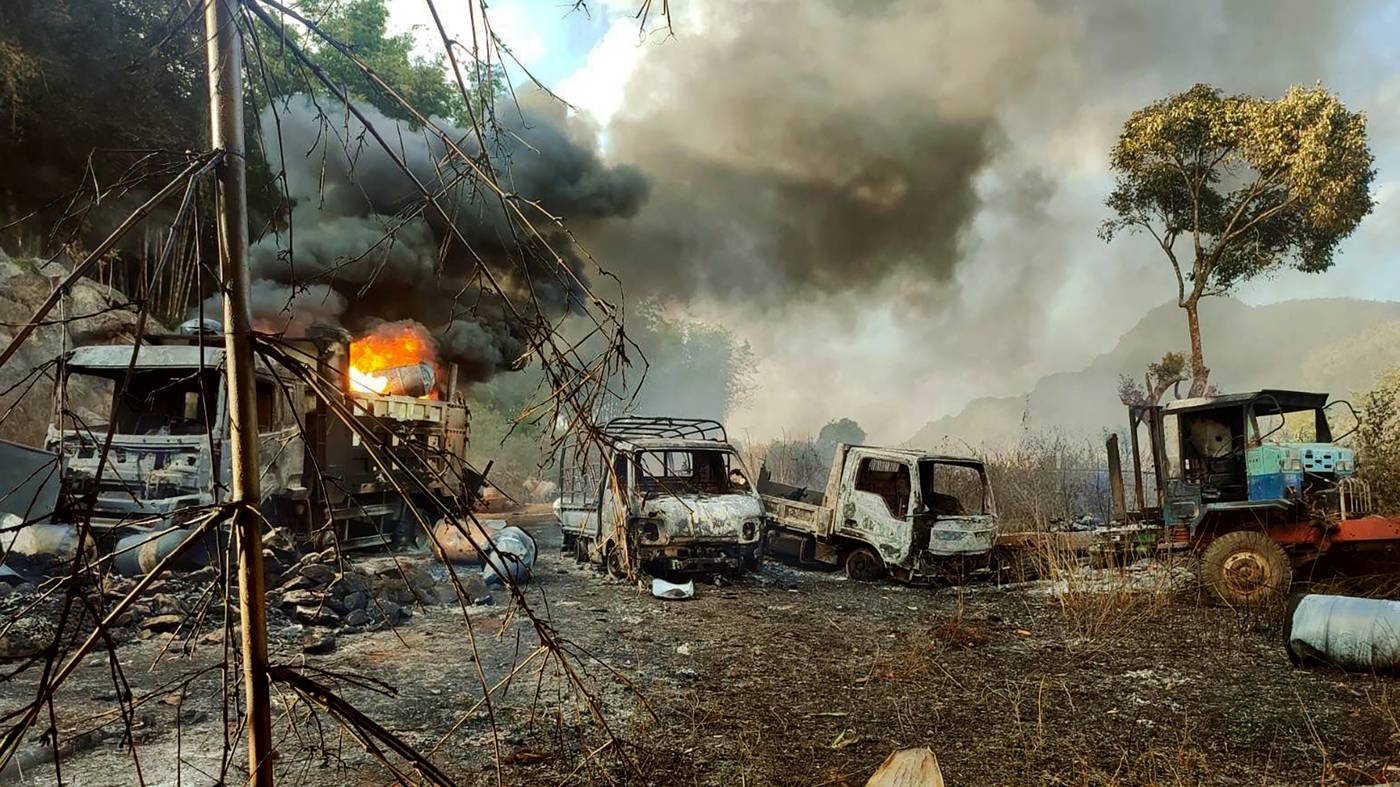 Smoke and flames billow from vehicles in Myanmar’s Hpruso township on Friday. Government troops rounded up villagers, fatally shot more than 30 and set the bodies on fire, a witness and other reports said Saturday.

Smoke and flames billow from vehicles in Myanmar’s Hpruso township on Friday. Government troops rounded up villagers, fatally shot more than 30 and set the bodies on fire, a witness and other reports said Saturday.

BANGKOK (AP) — The international aid group Save the Children said two of its staffers were missing in a massacre in eastern Myanmar that left more than 30 people, including women and children, dead and burned in their vehicles after they were reportedly shot by government troops as they were fleeing combat.

Photos of the aftermath of the Christmas Eve killings in Mo So village, just outside Hpruso township in Kayah state, spread on social media in the country, fueling outrage against the military that took power in February after ousting the elected government of Aung San Suu Kyi.

The accounts could not be independently verified. The photos showed the charred bodies of over 30 people in three burned-out vehicles.

On Sunday, the U.S. Embassy in Myanmar said it was appalled by the “barbaric attack in Kayah state that killed at least 35 civilians, including women and children.”

“We will continue to press for accountability for the perpetrators of the ongoing campaign of violence against the people of Burma,” it said in a statement.

Save the Children said it was suspending operations in the region.

A villager who said he went to the scene told The Associated Press that the victims had fled the fighting between armed resistance groups and Myanmar’s army near Koi Ngan village, which is just beside Mo So, on Friday. He said they were killed after they were arrested by troops while heading to refugee camps in the western part of the township.

Save the Children said that two of its staff who were traveling home for the holidays after conducting humanitarian response work in a nearby community were “caught up in the incident and remain missing.”

“We have confirmation that their private vehicle was attacked and burned out,” the group added in a statement. “The military reportedly forced people from their cars, arrested some, killed others and burned their bodies.”

The government has not commented on the allegations, but a report in the state-run Myanma Alinn daily newspaper on Saturday said that the fighting near Mo So broke out on Friday when members of ethnic guerrilla forces, known as the Karenni National Progressive Party, and those opposed to the military drove in “suspicious” vehicles and attacked security forces after refusing to stop.

The newspaper report said they included new members who were going to attend training to fight the army, and that the seven vehicles they were traveling in were destroyed in a fire. It gave no further details about the killings.

The witness told the AP the remains were burned beyond recognition, and children’s and women’s clothes were found together with medical supplies and food.

“The bodies were tied with ropes before being set on fire,” said the witness, who spoke on condition of anonymity because he feared for his safety.

He did not see the moment they were killed, but said he believed some of them were Mo So villagers who reportedly got arrested by troops on Friday. He denied that those captured were members of locally organized militia groups.

Myanmar’s independent media reported on Friday that 10 Mo So villagers including children were arrested by the army. The media said that four members of the local paramilitary Border Guard Forces who went to negotiate for their release were reportedly tied up and shot in the head by the military.

The witness said the villagers and anti-government militia groups left the bodies as military troops arrived near Mo So while the bodies were being prepared for cremation.

“It’s a heinous crime and the worst incident during Christmas. We strongly condemn that massacre as a crime against humanity,” said Banyar Khun Aung, director of the Karenni Human Rights Group.

Earlier this month, government troops were also accused of rounding up villagers, some believed to be children, tying them up and slaughtering them. An opposition leader, Dr. Sasa, who uses only one name, said the civilians were burned alive.

A video of the aftermath of the Dec. 7 assault — apparently retaliation for an attack on a military convoy — showed the charred bodies of 11 people lying in a circle amid what appeared to be the remains of a hut.

Fighting resumed over the weekend on the border with Thailand, where thousands of people have fled to seek shelter. Local officials said Myanmar’s military had unleashed airstrikes and heavy artillery on Lay Kay Kaw, a small town controlled by ethnic Karen guerrillas in neighboring Kayin state, since Friday.

The governor of Thailand’s Tak province, Somchai Charoenkitroongroj, told reporters that around 4,700 evacuees from Myanmar were in three shelters across the border. Sounds of gunfire and explosions could be heard across the river dividing the countries.

“We call on the regime to immediately cease its indiscriminate attacks in Karen state and throughout the country, and to ensure the safety of all civilians in line with international law,” the joint statement said.