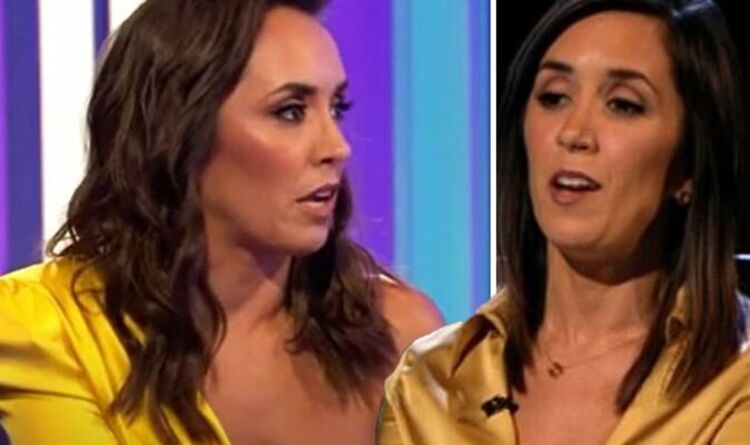 It Takes Two host Janette Manrara has opened up about her decision to leave hit BBC show Strictly Come Dancing last year. Appearing on Celebrity Mastermind, the wife of pro dancer Alijaz Skorjanec, 38, was quizzed about her knowledge of Disney Renaissance films while explaining why she left the hit show to host It Takes Two in September last year.

The star was grilled on her favourite Disney films by presenter Clive Myrie.

However, the host also took it as an opportunity to question the dance star over her recent career change.

Clive asked Janette: “So you’ve given up dancing on Strictly and now you’re a presenter on It Takes Two, why the change?”

The star revealed that she was hesitant to say goodbye to the show after eight years.

Janette admitted: “Well, I did not want to leave the legendary Strictly ballroom floor.

“But unfortunately when you get such an incredible opportunity like that, presenting It Takes Two you can’t really say no to that job.”

The star went on to explain that she landed the hosting role eight years after first visiting the set.

Janette explained: “I remember walking into the studio of ITT the first time in 2013 and meeting Zoe Ball.

Appearing in a dazzling bronze mini dress, Janette stunned as she sat in the hot seat while being quizzed.

The star kept her brown tresses perfectly straight, while she opted for a full face of makeup, complete with a glamorous smokey eye and nude lip.

Elsewhere, Janette told how she begged Strictly’s producers to let her have one last dance before she departed.

Speaking on Lorraine, Janette opened up about the “emotional” final performance she had on the dancefloor.

Janette said: “I begged the producers the whole series, ‘Just give me one last dance!’

“I just wanted one last moment to say goodbye to that floor because it’s such a special dancefloor.”

She added that the producers called her on her birthday to tell her that her husband Aljaz and her would be dancing together with a chart-topping superstar.

“They called me on my birthday to tell me that Aljaz and I would be dancing together with Ed Sheeran,” she gushed.