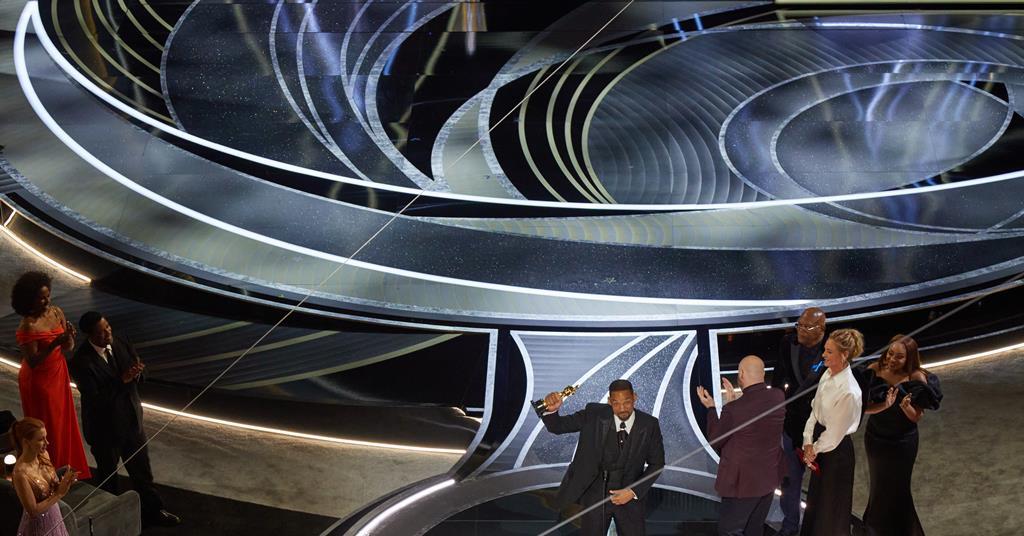 There were Oscars handed out at the 94th Academy Awards, although they weren’t on anybody’s minds in the last 30 minutes of the show. After the biggest Oscars buzzkill in living memory, the main focus this week will be the ongoing fallout from an incident on stage at the Dolby Theatre that at first played out like bad slapstick, until it became clear it was a real slap.

When Will Smith strode onto the stage and struck Chris Rock after the presenter made a joke about his wife Jada Pinkett Smith, it was loud. “Wow. Will Smith just smacked the shit out of me,” said Rock to laughter. Many in the audience thought they were witnessing a scripted sequence dreamt up by show producer Will Packer to boost ratings.

In hindsight Rock’s use of language was a sign that all was not right. Smith had returned to his seat and his language put the matter beyond doubt. “Leave my wife’s name out of your fucking mouth!” bellowed the soon-to-be-anointed best lead actor Oscar winner. The acoustics of Dolby Theatre proved their mettle as his choice phrasing rung out across an auditorium plunged suddenly into silence, as if Packer had pressed the mute button on a long evening that while not always engrossing had produced moments of genuine joy.

Those of us in the mezzanine level where press were seated stood up, necks craned, to get a view of a unique and uniquely ugly scene. Rock kept his composure and went down among the armchairs and tables where nominees sat spaced out in more ways than one to apologise to Smith.

Off-camera, fellow lead actor nominee Denzel Washington is said to have stepped between the two men and later consoled Smith, as did Tyler Perry and Bradley Cooper. A seemingly laid-back approach to security had just allowed an angry, shouty man to storm the stage and sources said nominees nearby the fracas were alarmed and some wanted to leave.

As incredulous attendees remembered to breathe, a low murmur of curiosity mixed with disbelief rippled over the audience. Rock carried on gamely, declaring Summer Of Soul the best documentary and presenting the Oscar to Questlove, whose heartfelt acceptance speech played out like a surreal footnote while the entire room played out that slap in their minds.

Rock exited stage left with the winners and we learned later that he spoke to LAPD and declined to press charges. Backstage meanwhile, Academy officials scrambled to get Packer, executives from broadcaster ABC and Smith’s representatives together to discuss next steps. The best lead actor Oscar presentation was up in 11 minutes. There was serious talk about having Smith escorted from the premises.

In the end he stayed and reappeared on stage – this time legitimately – to accept his Oscar whereupon he proceeded to talk about defending family, God’s calling, and how he was a river to his people. It was meant to be a defining moment in the career of an actor who had given the performance of his life and instead sounded like part-gratitude, part-justification for what he had done to Rock.

Until then the show had been chugging along in its merry way, a disjointed assembly of parts. Serena and Venus Williams, clueless as we all were at 8pm PT on Sunday night as to what would unfold several hours later, opened the show and cued up Beyoncé performing ‘Be Alive’ from King Richard in the sisters’ childhood turf of Compton, south Los Angeles (pre-recorded, it was later confirmed). Musical slots included Billie Eilish performing her eventual Oscar-winning song ‘No Time To Die’ and Megan Thee Stallion joining in a version of ‘We Don’t Talk About Bruno’ from Oscar winner Encanto that fell a little flat.

There were classy speeches from supporting acting winners Ariana DeBose for West Side Story and Troy Kotsur for Coda, trailblazers whose ebullience was heartening to see. Kenneth Branagh was charm personified when he accepted his original screenplay Oscar for Belfast. Jane Campion became only the third woman to win the directing Oscar. Her victory was the most obvious shoo-in in a night of no surprises in terms of who won what and the speech lacked spontaneity but was nonetheless well received.

Co-hosts Amy Schumer, Regina Hall and Wanda Sykes were lively and generally avoided roasting guests, although one wonders how Hall’s pat-down of supposedly eligible male nominees and presenters like Bradley Cooper, Jason Momoa and Perry would have played out had the genders been reversed. Sykes cracked gags in a pre-recorded tour of the Academy Museum, while Schumer delivered some sharp one-liners, dangled from cables in a superhero outfit and produced the great improv line of the show. Appearing after the Smith-Rock moment of madness, the comedienne quipped, “I’ve been getting out of that Spider-Man costume. Did I miss anything?”

That alone was an argument for the return of hosts. How the show could have navigated through those final minutes without one is anybody’s guess.

Jessica Chastain was an emotional Oscar winner for The Eyes Of Tammy Faye. That came after Smith’s acceptance speech and her comments in support of the LGBTQ+ community drew sustained applause on a night when winners from traditionally underrepresented or embattled groups spoke with dignity. Support for Ukraine came from an eloquent introduction by Ukrainian actress Mila Kunis of Reba McEntire, who performed the Oscar-nominated song ‘Somehow You Do’ from Four Good Days.

By the time Coda, the little drama that could which premiered 14 months ago at Sundance 2021, won best picture, what should have been a genuine climax of the night was overshadowed by you-know-what. People in the audience were still buzzing about the preceding 25 minutes. Coda won all three Oscars it was nominated for – supporting actor, adapted screenplay for writer-director Sian Heder, and the big one. Apple’s victory means that for the first time a streamer has won the grand prize. It might get to like the awards game and has some big movies lined up including Martin Scorsese’s Killers Of The Flower Moon and Antoine Fuqua’s Emancipation starring… Will Smith.

The show was meant to last three hours and ran over by 40 minutes. No matter: early ratings from Nielsen revealed a 56% rise over last year to 15.4 million US viewers, which is still the second lowest Oscars show in history but a marked improvement on last year’s debacle. Guests lined up eagerly to get into the Governors Ball upstairs and once inside producers, executives and other guests kept saying they were speechless and shook their heads and shrugged. An hour later the party was in full swing and a spirit of bonhomie infused the room. Kodi Smit-McPhee strolled around in a light grey suit, Jessica Chastain swished to and fro, while Campion celebrated her victory with the Netflix posse. Eilish paid her respects to Anthony Hopkins, who danced to salsa music.

Nearby at the Vanity Fair party, there were photos and footage of Smith enjoying himself, back in the bosom of a room where he was surrounded by friends and adoring hangers-on. On Monday the Academy issued a statement saying it condemned his behaviour and had instigated a full review of the incident by its board of governors, which could result in no action being taken or his expulsion from the Academy.

Smith later apologised to Rock via Instagram. At time of writing Rock had not replied.