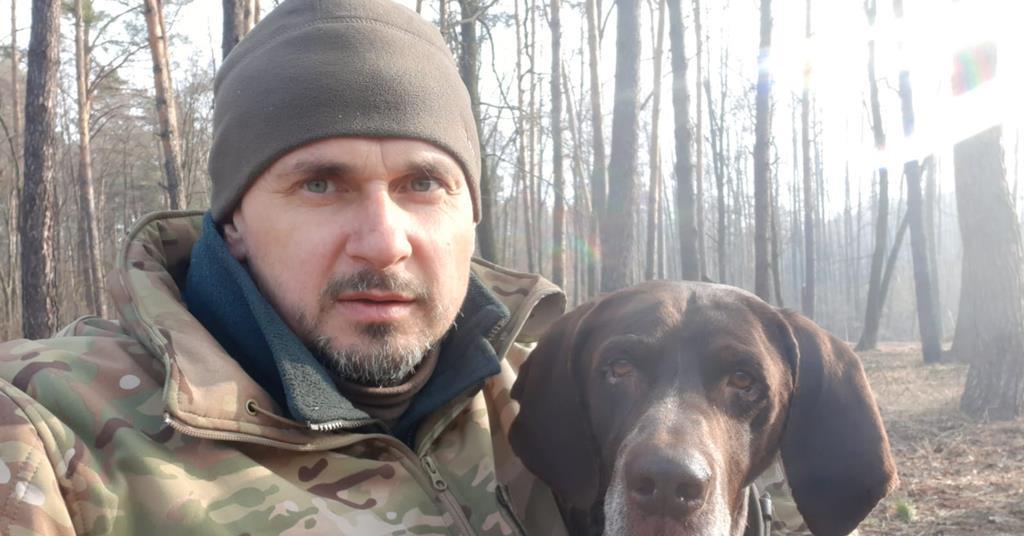 Just six weeks ago Ukrainian director Oleg Sentsov was walking the red carpet at Kyiv’s landmark Cinema House venue for the national premiere of his new film Rhino, ahead of its general release across the country on February 17.

The drama, about a young man who works his way up the ranks of the organised crime world in 1990s Ukraine, originally premiered in Venice’s Horizons sidebar last September.

“We had only one week in cinemas. We had a very good box office, but the war started and cinemas closed down,” says Sentsov.

Like all the guests that night, the director’s reality changed abruptly one week later when Russia kicked off its invasion of Ukraine on February 24.

Sentsov is among 100,000 Ukrainians who quickly signed up for the new volunteer branch of their country’s armed forces. Since then, the director has been stationed on and off in forests north of Kyiv, defending the capital city.

“It was so cold, I have [caught] a cough there,” he says, speaking to Screen during a two-week stint back in barracks in Kyiv. “There is a two-week rotation because the frontline is a very dangerous place and people need to rest.”

As the invasion enters its seventh week, the director has shared fresh images of his time at the front. They include footage of a hunting lodge, where his division stored supplies, ablaze after being bombed by a Russian helicopter.

“When mines and missiles and bullets and other guns and cannons fight very close to you, it [war] is real,” he says of what he has witnessed. Some of these “not so good” experiences he simply doesn’t want to talk about. He is convinced that Ukraine will win the war. “We need only victory because if we fall, we will not exist as a country or nation.”

Another less violent but equally telling image shows Sentsov hugging a large, abandoned dog, that has been taken in by his company.

“He doesn’t have a master. At the frontline, too many animals now are homeless,” he says, adding he plans to adopt the dog when the war ends. “I am very touched by him.”

Sentsov shot to fame internationally in 2014, after he was arrested in his home in Crimea by Russian security forces. His arrest came shortly after Russia annexed the contested region, in a move that would prove to be a precursor to its current full-scale invasion of Ukraine.

Sentenced to 20 years behind bars in 2015 on trumped-up charges of plotting terrorism, Sentsov was finally released in September 2019, after a dogged campaign by the international film community.

During his time in prison, Sentsov received thousands of postcards and letters from supporters and well-wishers. “Now we need support in other things. Not postcards or letters. We need helmets and military equipment… Ukrainians fight not only for ourselves but for the whole world,” he says.

He adds that his ordeal while in captivity in Russia prepared him for the new hardships of life at the front.

“Life as a soldier is not hard for me because I was in hard situations before in my life. It is not too terrifying for me,” he explains. “Any human doesn’t understand what he is before very hard times where he opens himself [up] frankly and deeply for other people.”

Like many other prominent Ukrainian filmmakers, Sentsov is calling for a boycott of Russian goods and culture.

He also has little time for or faith in peace negotiations being brokered by Turkey between Russia and Ukraine, which appeared to enter a new phase at a meeting in Istanbul on Tuesday (March 29).

“I don’t like it,” he says. “Many people in Ukraine don’t like it because you don’t have negotiations with killers, with terrorists. Russia spoilt all past deals with Ukraine and we don’t believe Russia, we don’t believe Putin. Russia must pay money for the strikes, the deaths, the damages in Ukraine. Putin and his close circle, they are military criminals.”

In spite of a pledge by Russia at Tuesday’s talks to pull back troops from the cities of Kyiv and Chernihiv, there were reports of attacks on Wednesday.

Against this backdrop, Sentsov has put the destiny of feature Rhino to the back of his mind, referring questions about it to his producer, Denis Ivanov.

“I don’t have time or wish to do any creative work. I am just a soldier. I am just fighting in the war. Maybe after the war, when it ends in our victory, I will return to art,” Sentsov responds when asked if he is able to write or film anything during the war.

Instead, he is using his directing skills as the “second commander” in his group. Some of his fellow soldiers recognise him. “They say, ‘Oh, you’re our hero. It’s a pleasure to meet you.’ I say, ‘We are all heroes now. I am not so important a person. I am the same as you’.”