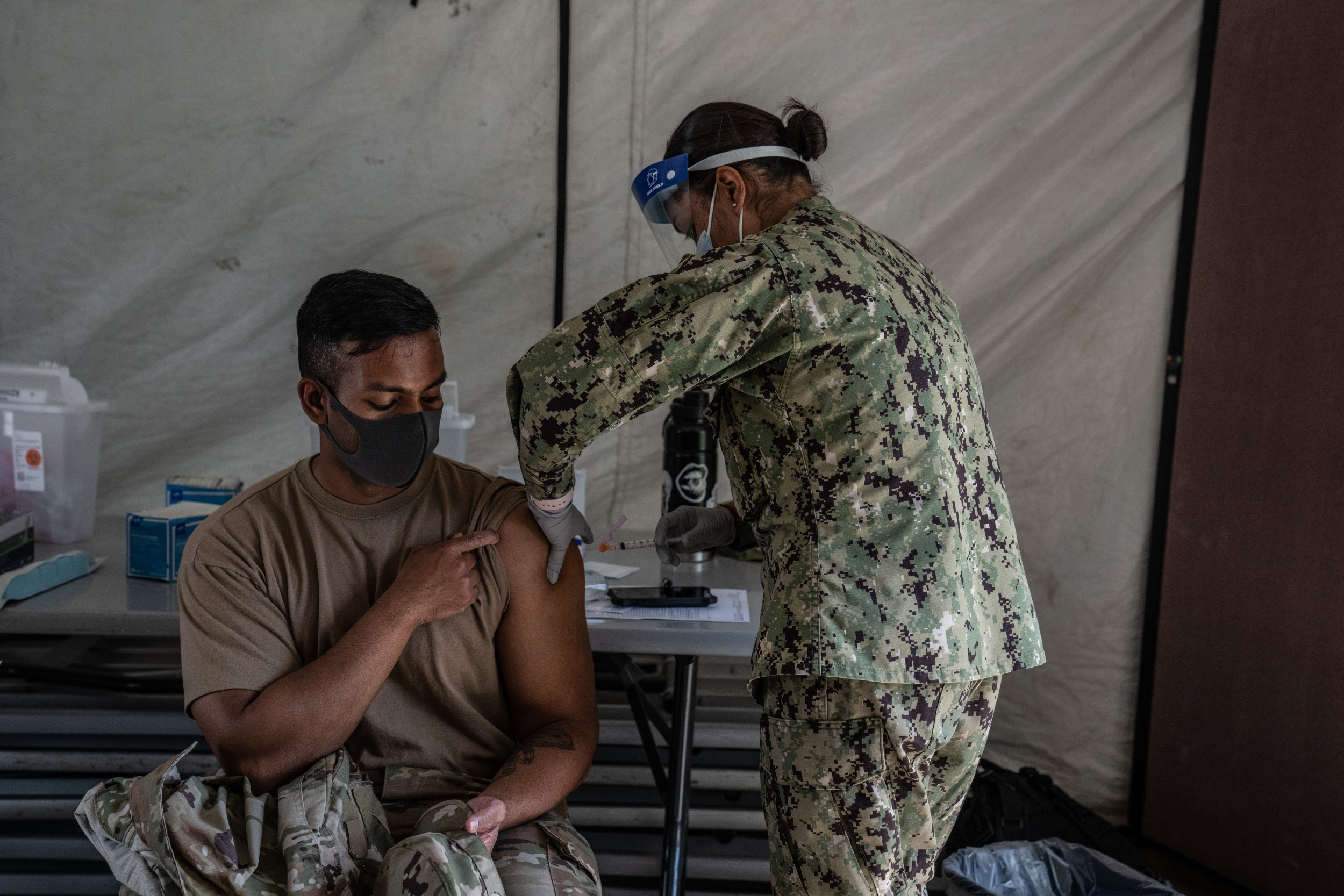 The U.S. Marine Corps may ultimately end up administratively separating up to 8,000 Marines who refuse to receive the COVID-19 vaccine, according to new data released Thursday.

The news came as the Marine Corps stated that they have already separated 169 unvaccinated members, including 66 this past week. A separation from the Marines is akin to a relief of duty or dismissal. It is not punitive like a court-martial; it is solely an administrative maneuver.

Active-duty members of the Marines had a Nov. 28 deadline to either be fully vaccinated or put in an application for a vaccine exemption, and Marine officials had warned that unvaccinated troops would eventually face separation, according to a previous statement.

The Marine Corps is currently the least-vaccinated branch of the military, sitting at a 95 percent rate among active-duty members, according to the most recent statistics.

The U.S Department of Defense (DoD) reported that the Navy is at 96.3 percent, the Air and Space Force stands at 96 percent, and the Army comes in at 98 percent.

Despite these statistics, this does not mean that a number of Marines have not been excluded from the vaccine requirement, as over 1,000 vaccine exemptions have been approved by the Corps. However, these have all been for either administrative or medical reasons, according to Marine Corps spokesperson Captain Andrew Wood.

A majority of the exemption applications, however, have been for claimed religious purposes, of which the Marines have not approved any.

“To date, there have been 3,192 requests for religious accommodation concerning the COVID-19 vaccine mandate. At this time, 3,080 have been processed and zero requests have been approved,” Wood said in a statement. The Marine Corps Times previously reported that the corps had not granted a single religious exemption for a vaccine in the past decade.

Given this track record, it is unlikely that the 8,000 Marines facing separation will receive any exemptions. However, they will not be dishonorably discharged, as the Times noted that a recent defense provision requires “service members discharged for vaccine refusal to receive either an honorable or general discharge.”

This past November, the Marines’ highest-ranking officer blamed the spread of misinformation as the reason for many soldiers’ hesitancies to get the shot.

“I think we’re challenged by disinformation that still swirls around about where the genesis, how did this vaccine get approved, is it safe, is it ethical?” said Commandant General David Berger. “All that swirls around on the internet, and they see all that, they read all that.”

Berger also pointed out the apparent irony of some Marines refusing to get the COVID-19 vaccine given that “just to get through boot camp, you got to get 12 vaccinations.”

However, if the numbers stand, the 8,000 Marines that could end up being separated would go against Berger’s initial guess. He had previously stated, “I don’t think it will be thousands of Marines,” he said in terms of the number of Marines who would remain unvaccinated.

While the deadline for active-duty Marines has already passed, reserve Marines have until Dec. 28 to be fully vaccinated.

The DoD referred Newsweek to the Marine Corps’ prior statement when reached for comment.