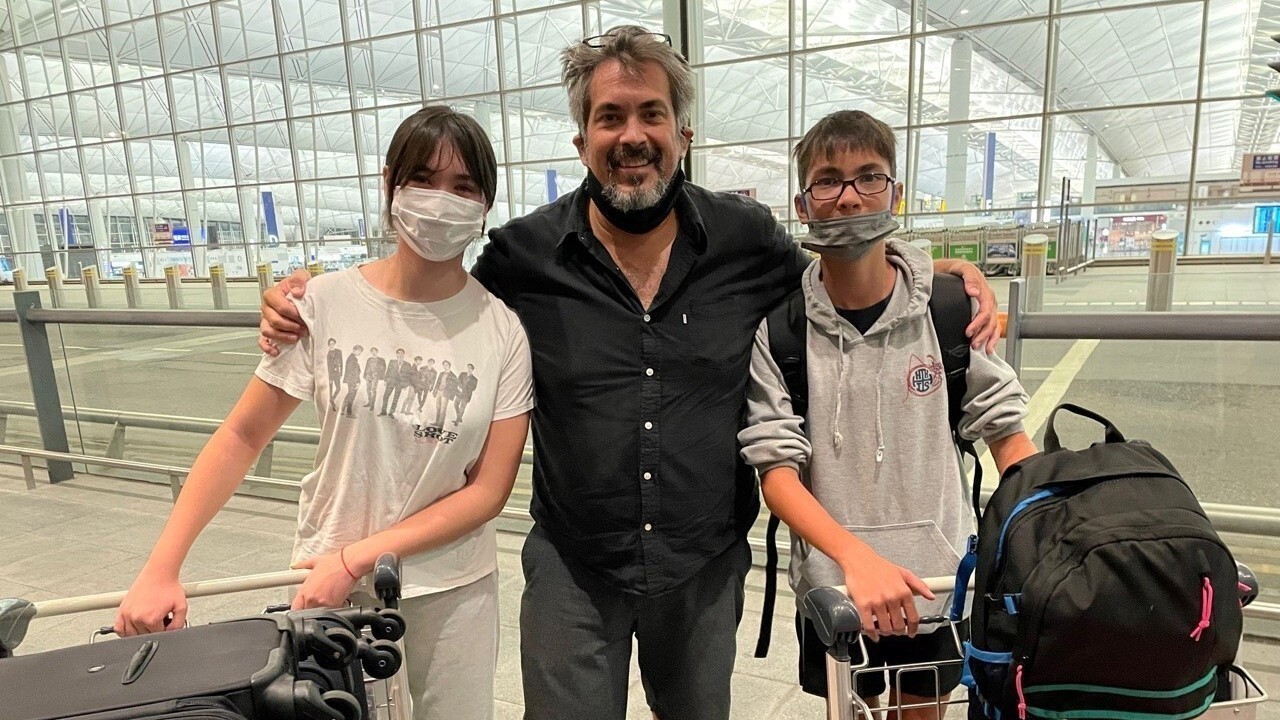 Kevin Tranbarger poses with his two children outside the Hong Kong International Airport in July, before they left for the United States. A few weeks later, Tranbarger decided to permanently move away from Hong after living there for nearly three decades.

Kevin Tranbarger poses with his two children outside the Hong Kong International Airport in July, before they left for the United States. A few weeks later, Tranbarger decided to permanently move away from Hong after living there for nearly three decades.

When Kevin Tranbarger first moved to Hong Kong as a teen, he was awestruck.

He was a kid from Connecticut, suddenly immersed in the bustle of the city’s financial district, with its towering buildings set against the surrounding hillsides. And he was impressed by the number of people from different countries at his new school.

“One of the things I loved about living there was it was a truly international place,” Tranbarger says. “It was just, you know, big city, bright lights,”

So after college, Tranbarger decided to go back to Hong Kong. As an architect, Tranbarger worked on real estate projects across the Asia-Pacific region, and he forged friendships and business relationships with people from around the world.

But in recent years, Tranbarger, like a number of other expatriates in Hong Kong, grew alarmed as political freedoms disappeared after China reasserted control of the territory, which had been under British rule until 1997.

Hong Kong, like mainland China, has imposed severe restrictions in a bid to stamp out infections through the pandemic. Yet despite these actions, the city is experiencing a surge in COVID-19 inections.

Currently, there are no direct flights from the U.S., and Hong Kong residents who travel abroad must quarantine in designated hotels for two weeks when they return, at their own expense.

Hong Kong has also imposed a number of ever-shifting restrictions on social gatherings.

Right now for example, in-person dining at restaurants is banned starting at 6 p.m., and bars, gyms and other places where people gather have been shut down.

Tranbarger decided he had enough.

So last summer, at the tail end of a two-month trip to the U.S., he decided not to go back to Hong Kong.

“I sent for my stuff, and it’s on a ship,” he says. “After 27 years living in Hong Kong, I left without even knowing I was leaving, and I didn’t say goodbye to anybody.”

Hong Kong is ’emptying out’

Today, Tranbarger is preparing to start a new chapter in California.

He is not the only one looking for new opportunities elsewhere. Although hard numbers are tough to come by, expats say a frequent topic of conversation is who will be the next to leave.

A report released last month by the American Chamber of Commerce in Hong Kong, an organization that represents more than 600 U.S. companies, showed 44% of more than 250 respondents are considering leaving the city because of its COVID policies.

According to Tara Joseph, the outgoing president of the Chamber, Hong Kong is “emptying out slowly.”

“Once Hong Kong goes through this difficult period, it may well return to being a fantastic international city for business,” she notes. “But right now, it’s going through a lot of throes and pains due to COVID.”

‘It was really a special place’

The decision to leave is often emotionally difficult for people.

Private equity investor Scott Hancock and his family had lived in Hong Kong since 2012, having moved there from Australia. Like Tranbarger, Hancock loved Hong Kong, including the diversity of its international residents and its hiking trails.

“The business energy was quite vibrant,” he says. “It was really a special place.”

But Hancock grew alarmed by the changes taking place around him.

In 2019 and 2020, Hong Kong was rocked by demonstration that drew hundreds of thousands of people and paralyzed the city’s financial district.

The protests were initially intended against plans to allow extraditions to mainland China, but they morphed into demands for democracy. They were some of the biggest demonstrations in the territory’s history.

Crackdowns by the police led to widespread arrests and a handful of deaths.

The crackdown has continued. It’s now illegal to criticize the Chinese government, or to talk about secession. Beijing has also clamped down on Hong Kong’s once free-wheeling media, arresting the founder of the pro-democracy newspaper Apple Daily, and freezing its banking assets, which led to its eventual shutdown.

Hancock watched all these developments with growing concern.

“You could begin to feel that the whole landscape was moving and shifting,” he says.

And Hancock began to have doubts about the rule of law as he witnessed personal freedoms disappear, along with some of the city’s spirit.

“There is a lot less openness in conversation,” he says. “People are more guarded about what they do from a business perspective.”

So a few months ago, Hancock and his family decided to relocate again. They are now living in London, and while they have fond memories of Hong Kong, they have no plans to go back as of now.

“I think it changed dramatically,” he says. “I don’t think it will ever be the same place that it was before.”