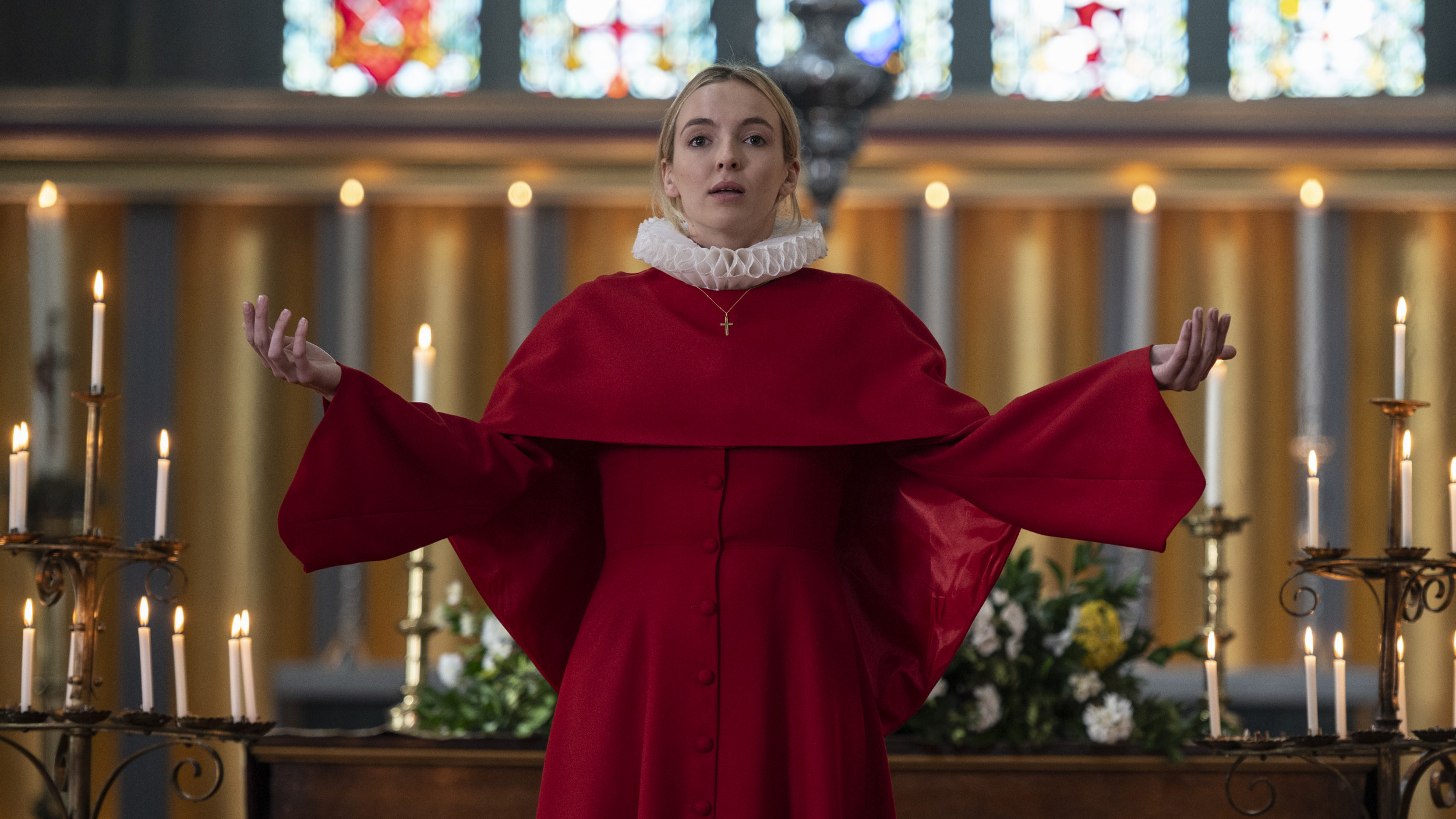 If you ever wondered what Killing Eve star Jodie Comer looked like as a man, let alone Jesus, look no further. At the end of Episode 1 of Killing Eve Season 4, Villanelle comes face-to-face with a very glamorous-looking Jesus, and even sits on her lap. Finding comfort in the holy version of herself, Villanelle is motivated to stay on track of becoming a better person, for Eve and with Jesus’s help. It should be easy, right?

Killing Eve showrunner and head writer, Laura Neal, explained to Newsweek why she had to get Comer to play the role of Jesus and what it means for Villanelle going forward.

Why Is Villanelle Jesus?

There is so much to unpack from Episode 1 of Killing Eve Season 4, with the arrival of old and new characters, Eve’s revenge mission, and the fact Konstantin is now a Russian mayor.

However, one character’s storyline will be particularly hard to forget for Killing Eve fans, for all the right reasons.

For the past three seasons, audiences have watched Villanelle’s varying personalities play out on screen, her secrets come to the surface and really fall in love with her, despite her killer instincts. But like Villanelle herself, nobody can understand how she really thinks, or even how she operates.

At the beginning of Season 4, highly-skilled assassin Villanelle is on a path of redemption. She’s even joined a church. Yes, really. She wants to prove to Eve (played by Sandra Oh) that she can change and be a better person for her.

Villanelle is so focused on becoming “good”, she believes the only way to do this is to follow God and in doing so, speak with Jesus.

But what does it mean when the Jesus you believe in is an extreme version of yourself?

Neal told Newsweek all about her decision to have Villanelle see herself as Jesus and, it may come as no surprise, the decision had something to do with Villanelle’s already strong “God complex.”

She shared: “I love injecting a bit of surreal humor into the show but it also made sense for me from a character perspective. Villanelle is somebody who is theatrical, right? And she’s very susceptible to theatre and to iconography and her imagination is exceptional.

“So for me, it made total sense that in this sort of like very febrile atmosphere where she’s surrounded herself in the iconography of the church that she would, if she had to imagine a religious icon guiding her, she would imagine a version of herself. That felt right because Villanelle has a God complex anyway and because she’s so self-absorbed, it made sense to me that she would project that part of herself outwards, and that we would be able to see it as a separate character.”

In Episode 1, Villanelle sees her upcoming baptism not as a religious ceremony but as a “party”. She invites Eve to have a front-row seat, but angered by Eve’s no-show, Villanelle resorts to her killing ways.

In a fit of rage, she tries to drown May (Zindzi Hudson) in the holy water but stops short of actually killing her, which Villanelle sees as a very good thing, something May of course does not understand.

When they return home that evening, things could not be more awkward as May avoids Villanelle out of complete and utter fear, and quite rightly.

As Villanelle goes downstairs to the living room, she is greeted by a gold knee-high-boot-wearing Jesus, eating popcorn and watching television.

Looking overjoyed to see herself as Jesus, Villanelle asks “What happens now?” to which Jesus replies: “Easy. I lead you to salvation” as tears of happiness stream down Villanelle’s face.

Just how long Villanelle will stay on the path of salvation is yet to be known.

As for Villanelle’s journey in the fourth and final season, Neal teased to Newsweek: “Villanelle is set on change, and she wants to be a good person, and she’s determined to prove to herself and to Eve that she can be.

“I think what is interesting to me coming off of the bridge [Season 3] is this is Villanelle’s desire to change. Villanelle has to go away from Eve to achieve that change, albeit temporarily. So she has to immerse herself in a so-called good community. So that’s where she goes, and she sort of inserts herself into the church.

“I think for Eve, she finally understands the grip that Villanelle has over her. And you know, she’s got this revenge mission and she knows that she can’t throw herself into that while Villanelle is around, so I think Eve is trying to keep Villanelle at arm’s length while she completes this mission.

“I think they are in different places to previous seasons because they both know each other’s whereabouts, like there’s no real cat and mouse in terms of that. It’s more just like that they’re emotionally trying to keep away from each other at the start of the season.”